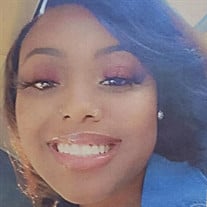 Kiara Ka'Shon Nicole Clark was born April 12, 1999 in Kansas City Kansas to Kendra Cooks and Pierre Clark. Kiara was a lifelong resident and educated in the Kansas City, Kansas Public School District, graduating from Turner High School in May of 2017. Kiara excelled in school and had dreamed of becoming a lawyer. On March 13, 2014, Kiara gave birth to Princess Ki'Myiah Tekoa LaShay Gray. Kiara and Ki'Myiah were inseparable and had an unbreakable bond. Kiara may have been a teenage mom but she excelled in it just as she had done with everything she did PERIOD. Kiara was the only grandchild for many years on her dad's side and was spoiled to the max. Kiara and Ki'Myiah would spend time in Chicago with her grandma Delores, Aunt Sharon and Clark family and really enjoyed their time with them. To know Kiara is to know she loved her brothers with all her heart and soul. Being the only girl she would behave as their mother, loving on them and crying with them. Kiara was a beautiful person inside and out. Anyone who knew her knew she was an amazing, caring, funny and a confident person. Kiara was the life of the party, but shy, outspoken but timid, to know her was to love her. Kiara began doing hair at a young age and planned to start Wigs by KiKi before her life was suddenly taken. Kiara departed this life Sunday, October 4, 2020. She was preceded in death by her brother/best friend, Ervin Carson, maternal grandfather Edward "Moose" Bell, paternal grandfather Fred Ellington, great grandparents Mary and William Bell and Ethel McTouch. Kiara's memory will live on and be cherished by her one and only child, KiMyiah, her mom and best friend Kendra, dad Pierre, step dad Michael; grandmothers: Delores (Chicago) and JoAnne: brothers: Sheldon, Edward, Michael, Jordan, Aiden, Prince and Tobias; sisters: Perion, Sha'Kayla, Mailha; aunts: Shawnmikya (Rufus), LaTisha, LaChrisha (Tony) and Brittany: great great grandma Loucille; great aunt LaShonda and great uncle EF; godmother and god sister Bette and Ebonne'; second mom Quianah; favorite cousins Maurice, Kylesha and Bryttni; first love Zai extended family the Carson's and a host of friends and family.

The family of Kiara Ka’Shon Nicole Clark created this Life Tributes page to make it easy to share your memories.

Send flowers to the Clark family.