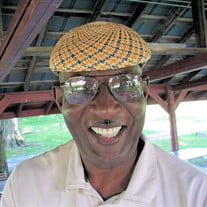 Kenneth Sims, 72, of Boonville, passed away on Sunday, November 8, 2020, at his home. Services will be held on Saturday, November 21, 2020, at 12:00 PM at H.T. May and Son Funeral Home in Boonville. Visitation will be from 11 AM to 12 PM at the funeral home on Saturday. The service will be streamed live at 12:00 pm at https://m.facebook.com/htmayfuneralhome/. Kenneth Norman Sims age 72, ​passed away peacefully at home surrounded by his loving family on Sunday November 8, 2020. Born in New Lebanon, MO, on February 3, 1948, Kenneth is the fourth son of Eugene and Ada B.(Frazier) Sims. At an early age, he was baptized at Mt. Moriah AME Church in Mount Moriah, Missouri. Kenneth is a member of St. Matthew's Chapel AME Church in Boonville, MO. Kenneth is a man of good measure and would help around the church when needed. Until he became ill he was the church janitor for several years. He supported all of his wife's many church endeavors, programs, etc. Kenneth graduated from Pilot Grove High School in 1966, he was drafted into the United States Army in January 1968. After all training he was was stationed in Panama. Kenneth achieved the rank of a SP5- Specialist 5/Corporal - a position reserved for support and technical MOS. After his two year tour of duty with the U. S. Army, Kenneth continued serving our country in the Army Reserve until 1974. Kenneth worked at McGraw-Edision when he returned from the Army, later he found his profession as an accomplished and respected Diesel Mechanic. Throughout his career he worked at companies in the Columbia Missouri area, Dalton Concrete, S and C. Diesel, Emery Sapp and Son and Triple S Hauling where he retired from in 2010. Kenneth had a strong work ethic and an impeccable mechanical intuition. He could fix anything you put in front of him ranging from trucks and cars to watches. If it had a motor or mechanical engine, or any kind of mechanism he could fix it. Kenneth was an avid Nascar fan and Loved his Nascar races. His favorite football player was Patrick Mahomes of KC Chiefs. He enjoyed his music and loved dancing. He would often take credit for teaching his daughters and grandchildren how to dance!.Kenneth especially enjoyed his weekly Sunday morning phone conversations with all three of his brothers. He enjoyed tending to his plants and flowers in the yard and on his porch. Kenneth also enjoyed sitting in his recliner having lively, colorful and daily conversations with his buddy/brother from another Godly mother, Butch.(Charles Elbert). Most of all, he loved his wife, children and grandchildren so fiercely. Kenneth was a Beloved Husband, Father, Grandfather, Brother, Brother-in-law, uncle and Friend, We already miss him so very much ,but we know to be absent from the body means he is present with the Lord, his new life and his new journey has just begun. Kenneth is preceded in death by his parents Eugene and Ada B. Sims, brothers John, Leonard, and Richard Sims. He leaves to cherish his memory his loving wife Nellie Ann Sims of the home, his daughters Bonita Ann Williams of Sugarhill, GA , Christy Lynn Sims of Raytown, MO, his grandchildren, Brian Kenneth Williams, Philadelphia, PA., Grey Lee Williams, Spencer Grace-Margret Williams, Bailey Ameil-Christina Sims, three brothers, Alfred “Wayne” Sims(Renee), Donald Sims(Mary), Norbert Sims(Kathy), loving sisters-in law, brothers-in law, nephews, nieces and a host of cousin. Rest peacefully, We Miss you!

The family of Kenneth Sims created this Life Tributes page to make it easy to share your memories.

Kenneth Sims, 72, of Boonville, passed away on Sunday, November...

Send flowers to the Sims family.