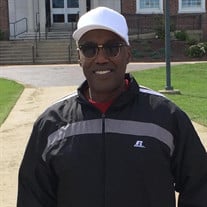 Keith Anthony Poindexter, 62, of Dorchester, MA, (formally of Boonville, MO) was called to glory on Monday, December 9, 2019. Keith was born in Boonville, MO on December 12, 1956, to the late Eursey E. Poindexter and Minnie Ola Harris Poindexter in Boonville, MO. Keith is a 1976 graduate of Boonville High School. Shortly after high school, he attended Lincoln University in Jefferson City, MO. In 1981, Keith set out on his own path to Boston where he became a Correctional Officer for the Commonwealth of Massachusetts and later a licensed Barber. Keith met the love of his life and was united in marriage to Juliette Strother on August 15, 1987, in Boston, MA. Keith received Christ at an early age. He began his spiritual walk at Morgan Street Baptist Church in Boonville, MO and continued his spiritual journey as a strong and faithful member of the Nation of Islam where he held the title of Lieutenant. Keith was employed with United Airlines for a number of years before his retirement in 2005. He was not one who could sit still for very long so he continued his quest for knowledge and obtained his Associate of Science in Paralegal Studies from Quincy College on May 22 , 2010. He also began working part-time for 1st Armor Protection Services. Keith had an exuberant smile and an adventurous spirit. Knowing that knowledge is power, he was an avid reader who loved to learn. He enjoyed Karate and Jiu-Jitsu. He believed in taking the best care possible of his body and encouraged others to do the same. In his youth, he enjoyed playing sports, especially baseball. His favorite sport to watch was Football. Keith’s sense of humor was lovingly relentless. He was the master jokester and prankster and an extremely smooth dancer. Keith loved and believed in having a strong family foundation. He enjoyed spending quality time with his family and friends. He was always willing to share his love, wisdom, and positivity. Keith leaves to cherish his memory; his wife Juliette, his daughter, Khaalida Poindexter and his son, Tyrone Strother. He also leaves to treasure his memory his brothers, Sylvester J. Briscoe, Allston, MA, David E. (Cannie) Briscoe, Columbia, MO and Eursey Jaye (Donna) Poindexter, Aurora, IL. His sisters, Erma Adell (William) Bruce, Kansas City, MO, Margaret Kaye Poindexter, Chelsea, MA, and Alesia Ann Poindexter, Boonville, MO. Keith is survived by a great host of nieces, nephews, cousins, and friends. He was preceded in death by his parents, his sister, Norma Jean Evans, his brother Charles Wayne (CW) Hemingway and his son, John Milton, Jr. Celebration of life services for Keith A. Poindexter will be held on Friday, December 20, 2019 at St. John Missionary Baptist Church, 230 Warren St, Roxbury, MA 02119. Visitation will begin at 10:00 a.m. until time of services at 11:00 a.m. Interment will be at St. Michael Cemetery in Roslindale, MA. Arrangements are entrusted to George Lopes Funeral Home 821 Cummins Highway, Mattapan, and MA 02126. www.georgelopesfuneralhome.com .

The family of Keith Anthony Poindexter created this Life Tributes page to make it easy to share your memories.

Send flowers to the Poindexter family.