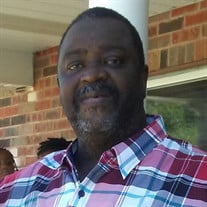 Keith Finger, 60, of Fulton, MO passed away on Friday, October 19, 2018 at his home. Services will be held at 12pm on Saturday November 3, 2018 at Second Christian Church in Fulton. The visitation will be held from 11 am to 12 pm at the church. Keith F. Finger, 60 of Fulton, Missouri gained his wings at his home on Friday, October 19, 2018. Keith was born in St. Louis, Missouri on November 27, 1957, to the union of Ruby Lillian Finger and Sam Jones, he was the youngest of seven children. Keith confessed his belief in Christ and was baptized at Calvary M.B. Church of Fulton, Missouri in 2000. He was a devoted father to two loving sons Keith A. Green (R.I.H), Keyron Jermaine Gill, four loving stepchildren Gwendolyn A. Bruce (R.I.P), Billie L. Bruce, Willie L. Bruce and Kasia S. Coleman. Keith attended St. Louis Public Schools. He worked at Petro/Iron Skillet Rest Stop, Fulton State Hospital, St. Louis Club, and various other jobs. Keith was united in matrimony to Marsha R. Finger, for 32 years who remained by his side, and is still at the home. Keith’s 60 years of life gave us lasting and loving memories that can and will never be forgotten. He was a man who lived his life with “zest”. Keith’s passion for the outdoors, and the park was “contagious”, also sitting near the domino or gambling table, but holding steadfast for the “Lord” was #1. He is survived by his wife Marsha R. (Bruce) Finger, who loves him more than anyone will ever know, Brother Edward Dewayne Finger, sisters Trenace Y. Finger (Ron) Eason, Wanda Colette Dabney, and a host of grandkids, uncles, aunts, nieces, nephews, cousins and many more. He was preceded in death by his mother Ruby L. Finger, father Sam Jones, brothers Louis A Hunt (Butch), Ear G. Finger (Dickie), son Keith A. Green, and stepdaughter Gwendolyn A. Bruce. The family is asking for contributions towards the homegoing service for Keith. Any amount is a blessing to the family. Donations can be made at https://fundthefuneral.com/keith-finger.

Keith Finger, 60, of Fulton, MO passed away on Friday, October 19, 2018 at his home. Services will be held at 12pm on Saturday November 3, 2018 at Second Christian Church in Fulton. The visitation will be held from 11 am to 12 pm at the church. Keith... View Obituary & Service Information

The family of Keith Finger created this Life Tributes page to make it easy to share your memories.

Keith Finger, 60, of Fulton, MO passed away on Friday, October...

Send flowers to the Finger family.