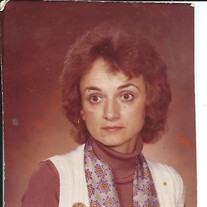 Katherine Scheidegger, 70, of Columbia, MO. passed into eternity on Thursday, August 31, 2017 at her home. Memorial services will be held on Friday, September 8, 2017 at 4:00 PM at the H.T. May and Son Funeral Home in Columbia. Visitation will be from 3-4 PM Friday at the funeral home. Katherine Marie (Gleeson) Scheidegger (10/28/1946- 08/31/2017) of Columbia, MO was the first born of 10 children to John M. and Katherine Gleeson. As a child, she lived on a farm in rural Missouri and went to St. Joseph in Rhineland, MO. As a graduate of St. George High School, Herman MO, Kathy graduated as Val Victorian of her class. She went on to study Social Work, graduating with a MSW (University of Missouri) 1981; BSW, College of Public and Community Services (University of Missouri) 1980; AA (East Central Junior College). She was a member of the National Association of Social Workers, NOW, Phi Theta Kappa, Dean’s List every semester, and graduated Summa Cum Lade (published in the book, Who’s Who, Among Students in American Universities and Colleges). She worked at the University of Missouri in the Private Agency of Social Work and Counseling for 10 years, having touched many lives as an OB Social Worker with a dedication to helping high risk youth make important life decisions. In 1967, Katherine married Kenneth M. Scheidegger (Herman, MO), together they had one daughter. Shelly went on to have one son, Derek, who married Lauren in 2013. Kathy developed Crohn’s Disease in her early 20s, the impact this had on her life didn’t stop her from the dedication she showed to her family, career, and animals. She never gave up, even when going through work with her IV treatments slung over her shoulder! After the many surgeries and being unable to work, she re-dedicated her life to supporting the rights of animals when her sweet little grandson rescued a little kitten, Bright Eyes. Developing this love for the animals, she went on to support animal rights as a member of several organizations: AAVS, Animal Legal Defense Fund, African Wildlife Foundation, Doris Day Animal League, EDF, Four Paws, Oceans Conservancy, National Wildlife, NAVS, NOW, PETA, Physicians Committee for Responsible Medicine, PIGS Animal Sanctuary, Save Them All, The Gorilla Foundation, Tiger Haven, Federation, and World Life Organization. She leaves to cherish her memory her mother Katherine Gleeson of Hermann, MO., one daughter Shelly Scheidegger of Columbia, MO., five brothers Mark Gleeson and JOe Gleeson both of Hermann, MO., Luke Gleeson and Kenny Gleeson both of Rhineland, MO., and Matt Gleeson of Holts Summit, MO., three sisters Becky Gleeson of Phoenix, MO., Barb Schaefer of Columbia, MO., and Bernadette Landrum of Oakdale, CA., and one grandson Derek (Lauren) Scheidegger of Blue Springs, MO. She was preceded in death by her father John M. Gleeson and one brother J.P. Gleeson . Memorial contributions are suggested to the Scheidegger Family.

Katherine Scheidegger, 70, of Columbia, MO. passed into eternity on Thursday, August 31, 2017 at her home. Memorial services will be held on Friday, September 8, 2017 at 4:00 PM at the H.T. May and Son Funeral Home in Columbia. Visitation will... View Obituary & Service Information

The family of Katherine Scheidegger created this Life Tributes page to make it easy to share your memories.

Send flowers to the Scheidegger family.