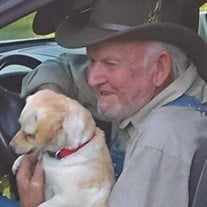 Junior “Paul” Maloney, 89, of Jefferson City,formerly of Belle, MO, passed away on Saturday, February 1, 2020, at his home. Arrangements are pending. He was born on January 2, 1931 in Douglas County, MO the son of Charles Otis Maloney and Elizabeth (Amanda) Manning. He was preceded in death by his son, Edward Maloney and his daughter ,Linda Sue Maloney. He was also preceded in death by his parents, his brothers Ray and Russell, and his sisters Ruby White, Ruth Stevens and Reba Lewis. Survivors include his beloved Pomeranian, Molly, close friends Terry, Lisa and April, and nieces and nephews. Growing up Paul loved to work with his dad on the farm. He later became a mechanic and worked in various cities in Missouri. Paul's passion was fishing. He also enjoyed playing the guitar. Arrangements are under the direction of the H.T. May and Son Funeral Home. Those wishing to send tributes or condolences may do so at www.htmayfuneralhome.com . Memorials are suggested to Hospice Compassus, 600 Monroe Street, Suite 200, Jefferson City, MO, 65101.

The family of Junior “Paul” Maloney created this Life Tributes page to make it easy to share your memories.

Send flowers to the Maloney family.