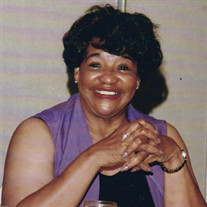 Joyce Darlene Broadus, of Los Angeles, CA., formerly of Fayette, MO. entered into eternal rest of Friday, December 23, 2016, at her home. Funeral Services under the direction of HT May and Son Funeral Home will be held at 1:00 PM on January 6, 2016, at St Paul Methodist Church in Fayette, MO. A viewing session will be from 11:00 AM thru 1:00 PM at the church. Our beloved Darlene Broadus passed away on December 23, 2016 in the comfort of her home and surrounded by family. Darlene was born and grew up in Howard County primarily in Fayette where she attended Lincoln School and was a faithful member of St. Paul Methodist Church. She worked for several years in Columbia, MO before in 1969 she and John Broadus united in marriage and decided to make their home in Los Angeles, CA. However, she never abandoned the home front, returning home to Fayette at least once yearly to visit with family and friends. Those that knew Darlene found her to be very sociable, outgoing and processed an overall warmness that put you at ease when visiting with her. Her 25 years of service as an Instructional Aid with the Culver City, CA School System was a natural fit for one with her interpersonal skills. Darlene also loved to play cards and would never walk away from a good ole competitive card game. It was not uncommon for her to play late into the evening or until the other players became too exhausted to continue. Her love for family and friends will be truly missed. Darlene is survived by her husband John and daughter Michelle; four sister, Betty Leonard, Allene Logan, Linda Turner all of Fayette and Christine Eubanks of Kansas City, MO; three brothers, George Turner (Norma) of Grandview, MO, Albert Turner (Margaret) of Boonville, MO and Richard Turner of Fayette, MO. She also leaves a host of nieces, nephews, cousins, and friends. She was preceded in death by her parents George and Louise Turner and one sister Audrey Paige.

Joyce Darlene Broadus, of Los Angeles, CA., formerly of Fayette, MO. entered into eternal rest of Friday, December 23, 2016, at her home. Funeral Services under the direction of HT May and Son Funeral Home will be held at 1:00 PM on January... View Obituary & Service Information

The family of Joyce Darlene Broadus created this Life Tributes page to make it easy to share your memories.

Send flowers to the Broadus family.