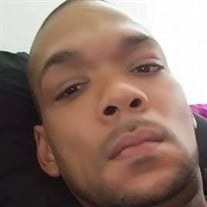 John Cornelius Wingate, 34, of Bismark,ND, formerly of Columbia, MO, passed away on Tuesday, September 3, 2019, at Chi St. Alexis healthcare in Bismark. Services will be held on Saturday, September 14, 2019 at 11 AM at Friendship Baptist Church in Columbia. Visitation will be held on Saturday from 10 to 11 AM at the church. On Tuesday Sept 3, 2019, John C. Wingate passed away in Bismarck, North Dakota. John was born to John Williams and Linda Wingate in Columbia, Missouri on August 9, 1985. John attended Columbia Public Schools. He later moved to North Dakota to make a better living for himself and his family. He was a very shy and laid back kind of guy. Every time you would pass by his dads house when he was in town, you would see John standing in the driveway with his hands behind his back, or swinging his arms like he was waiting for somebody. In his free time he loved listening to music and spending time with his family and friends. John leaves to cherish his memory his father John L. Williams, his mother Linda West both of Columbia, Mo, Grandmother Marion Dobbs of Haiti, MO, three sisters Jacqueline Burnett (Anthony) of Columbia, MO, Chris Cummings of Chicago, IL, and MaKayla Parsons (Victor) of Rolla, MO., also his girlfriend Shakandis Holmes , his children JaKobe Wingate an Jamir Holmes all of Dickenson, ND., a son Jay’lvion Fulton of Columbia, MO, a best friend /nephew Eric Dell Nesbitt, a host of Aunts, Uncles, nieces, nephews, cousins and friends. He was proceeded in death by his Grandfathers John W. Williams an John W. Wingate and a Grandmother Tinnie Williams.

John Cornelius Wingate, 34, of Bismark,ND, formerly of Columbia, MO, passed away on Tuesday, September 3, 2019, at Chi St. Alexis healthcare in Bismark. Services will be held on Saturday, September 14, 2019 at 11 AM at Friendship Baptist Church... View Obituary & Service Information

The family of John Wingate created this Life Tributes page to make it easy to share your memories.

Send flowers to the Wingate family.