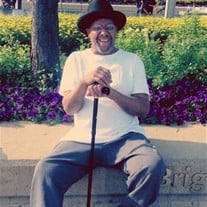 John Savin La Fleur, Jr., 66, of Columbia, slept into the arms of Jesus on Sunday, December 2, 2018, at Boone Hospital Center in Columbia. Funeral services will be held on Friday, December 7, 2018, at H.T. May and Son Funeral Home in Columbia at 2:00 PM. Visitation will be from 12-2PM Friday at the funeral home. Contributions towards services for John can be made at https://fundthefuneral.com/john-savin-la-fleur-jr. John Savin La Fleur, Jr. was born on June 17, 1952, in Alexandria, LA to the late John Savin La Fleur, Sr. and Juanita La Fleur. He was the second eldest of 11 children, raised in Detroit, MI, where he attended St. Andrew’s & Benedict School, as well as, schools in the Detroit Public School system. Later, John went on to pursue a career in Auto Mechanical Repair, obtaining his certification, becoming talented in multiple areas of expertise. Eventually, John moved from Detroit, MI to Columbia, MO in the mid 1980’s, making it his permanent home. John’s tremendous love, passion, and thrill of race cars was undeniable to anyone that was blessed to know him. Throughout his career, he demonstrated his creativity and built many notable cars from scratch. However, we all know that two of them, “Goofy” and “Christine” were especially dear to him, being his all time favorites. John had an amazing, charismatic personality with an infectious laugh which touched everyone he met. John’s humor and generosity allowed him to make fast friends with anyone and to develop friendships that endured through time. John spent the majority of his life self- employed, and as a proud owner of multiple auto repair shops in Columbia throughout the years. John’s auto shops were more than a business to him and to countless others; they were a safe place to relax, enjoy his hilarious jokes, to partake in amazing BBQ and endless conversation. Truly, John touched the lives of all that were fortunate enough to know and to love him. John leaves his devoted wife, Marsha Hayes- La Fleur to celebrate and cherish his memories. John’s remarkable compassion and kind heart enabled him to share an unconditional fatherly love by birth or marriage with 7 children: Janel La Fleur of Detroit, MI, Kwame (Felecia) Baines of St. Louis, MO, Reginald (Cherish) Hayes, Damone Hayes both of Columbia, MO, Rahdika (Tristan) Swann of Stafford, VA, Ladonna Redden of San Antonio, TX, Daruis Hayes and his precious baby girl, J’na Hayes both of Columbia, Mo. Lovingly, he was the proud grandfather of 19 grandchildren and several great-grandchildren. John also leaves to celebrate and cherish his memories, 6 sisters, Patricia Frierson of Las Vegas, NV, Mary Metcalf, Juanita Jackson, Deitra (Samuel) Crawford, all of Detroit, MI, Margaret (Richard) Small of Tucson, AZ, and Yolonda Chatman of Detroit, MI, and 1 brother, Ronald La Fleur of Washington D.C. He also leaves a host of nieces, nephews, and many beloved friends to celebrate and cherish his memories. John joins his parents John and Juanita La Fleur, 2 sisters, Deborah Williams and Linda Harper, 2 brothers, Anthony and Paul La Fleur, and his oldest daughter Masean Gresham who preceded him in death into eternal life.

John Savin La Fleur, Jr., 66, of Columbia, slept into the arms of Jesus on Sunday, December 2, 2018, at Boone Hospital Center in Columbia. Funeral services will be held on Friday, December 7, 2018, at H.T. May and Son Funeral Home in Columbia... View Obituary & Service Information

The family of John Savin La Fleur, Jr. created this Life Tributes page to make it easy to share your memories.