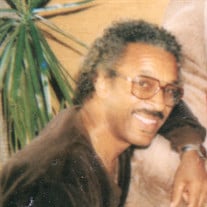 John Broadus, 93,of Los Angeles, CA., Formerly of Fayette, Mo, passed into eternity on Friday, October 20, 2017 at Encino Medical Center. Funeral services will be held on Monday, October 30, 2017 at St. Paul United Methodist Church in Fayette at 12:00 PM. Visitation will be from 11 AM -12 PM Monday at the church. John Ross Broadus was born on April 9, 1924 to Mary Willie and Benson Broadus and went to his rest on October 20, 2017. John was born in rural Fayette, Missouri. After serving time in the United States Army during World War II, he resided in Columbia, Missouri; Des Moines, Iowa; and for the past fifty plus years has made his home in Los Angeles, California. He entered into holy matrimony with Joyce Darlene Turner on July 12, 1969. To that union a daughter, Michelle Denise was born. John was employed by and retired from the Culver City Unified School District. He was a fun loving person who loved to make others laugh. His great passions were basketball, bowling and dancing. John was preceded in death by his wife of 48 years Darlene , his son John Ross Broadus Jr., his parents, two brothers and two sisters. He was also preceded in death by his first wife Hortense. To cherish him he leaves his loving daughter Michelle, 4 sisters-in-law, 3 brothers-in-law and many nieces, nephews and other family members who loved him very much. Fond memories will forever linger in the hearts of those who loved and knew him.

The family of John Broadus created this Life Tributes page to make it easy to share your memories.

Send flowers to the Broadus family.