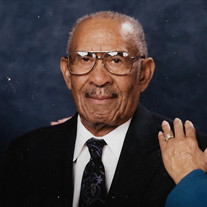 John H. Bass,98, of Fulton, MO., entered into paradise on Saturday, November 18,2017 at University of Missouri Hospital. Funeral services will be held on Saturday, November 25, 2017 at Log Providence Baptist Church at 1:30 PM. Visitation will be from 11:30-1:30 PM at the church. Deacon John H. Bass, Sr. son of Ernest and Jennie Bass was born in Boone County Missouri on August 21, 1919 and passed away November 18, 2017 at 6:29 a.m. John grew up in the vicinity of Columbia, Missouri. He attended Deere Park School as a boy. He worked as a farm hand for many years. And then he also worked at Crown Drug Store and Coca-Cola Bottling Company for 4 years. He served his country for 2-1/2 years in the army. Upon returning from the service he moved to Kansas City, Missouri and he united with Ms. Mae Helen Anderson. After marriage, John became a Christian and a Deacon and served faithfully for 50 years at Park Avenue Baptist Church, Kansas City, Missouri and continued as a Deacon at New Richland Baptist Church, Fulton, Missouri. John and Helen raised their son John H. Bass, Jr. in Kansas City, Missouri. After moving to Kansas City, Missouri he continued to work for Coca-Cola Bottling Company. Later he worked for J. E. Dunn Construction Company for 30 years as a Labor-Foreman. He retired in 1986 and moved to Fulton, Missouri where he and his wife (Mae Helen) enjoyed life to its fullest where his passion was taking care of Gods house. He will truly be missed by his wife (Mae Helen), son (John H. Jr.), sister (Hetty Coleman), several grandchildren, nieces, nephews, family, and friends.

The family of John H Bass created this Life Tributes page to make it easy to share your memories.

Send flowers to the Bass family.