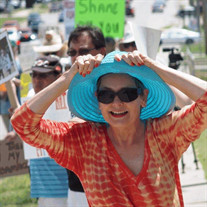 JOAN KATHLEEN DUNAWAY KEENAN (b. April 2, 1955, d. July 3, 2019) Joan Kathleen Dunaway Keenan, of Jefferson City, died Wednesday, July 3, 2019. She was 64. Joan was born on April 2, 1955 to the late Frank Shropshire and Mary Helen Dunaway of Diamond, Mo. She attended elementary school at Diamond R-12 and junior high and high school at Carthage Public Schools in Carthage, Mo. After graduating high school in 1973, she spent a year abroad in what was then Belgrade, Yugoslavia through the American Field Service. In 1974, she enrolled at Newcomb-Tulane College in New Orleans. In 1976, Joan spent a year abroad in Madrid, Spain. In 1978, Joan graduated with a bachelor’s degrees in Spanish with an emphasis in Latin American and Spanish literature and in studio art with an emphasis in printmaking. Soon after, Joan accepted a legal assistant/paralegal position at the New Orleans branch of Jones Walker LLP. In her 14 years at the law firm, she would go on to work as a recruiting administrator, liaison to the professional employment committee, liaison to the management committee and adjunct to the committee on practice standards. Joan married Bayne Keenan of New Orleans on June 16, 1984 at Grace Episcopal Church in Carthage. The couple resided in New Orleans and had two daughters, Charlotte and Madeleine. In June 1992 the family moved onto Elmerine Avenue in Jefferson City. Between 1992 and 1995, Joan worked as an administrative assistant at Memorial Community Hospital and the Missouri Bar. In 1995, she joined the Missouri Department of Mental Health (MDMH) as administrative assistant to the director of human resources. Joan remained employed with MDMH for 22 years. She earned her master’s in business administration at William Woods University in 2010. At MDMH, she became assistant coordinator of the office of disaster services, where she played a significant role in organizing the mental health response after the 2011 Joplin tornado. In 2017, Joan retired from MDMH as director of the office of disaster services. A lifelong Episcopalian, Joan began attending Grace Episcopal Church in Jefferson City in 1992. She participated as a Vestry member, as well as a soprano in the church choir. While her daughters were young, Joan hosted an annual neighborhood Halloween party and adopted the title of “Wicked Witch of Elmerine.” She helped found the Jefferson City Public Schools’ Orchestra Boosters, serving a term as president. She participated in the local chapters of Indivisible and MomsRising. A Master Gardener, Joan received local recognition for her skill in shade gardening and cultivating perennial plants, particularly hydrangeas. Joan became a certified yoga instructor, teaching accessible and restorative yoga classes at Missouri River Regional Library and the Unitarian Universalist Fellowship in Jefferson City. Joan also enjoyed bicycling with friends on the Katy Trail. Joan is survived by her husband, Bayne; daughters Charlotte Keenan and Madeleine Schwerin (Andrew); grandchildren Beulah, Hans and Scott Schwerin; siblings Frank “Shrop” Shropshire Dunaway, Charlotte Holland “Holly” Joyce (Max), Knox Garvin Dunaway (Charlotte) and Helen Marie Haughey (Jeff); numerous nieces and nephews and her two dog companions, Roxanne “Roxy” and Gertrude “Trudy.” Services will be held at 9:30 a.m. Sunday, July 14 at Grace Episcopal Church in Jefferson City, followed immediately by an informal reception to celebrate Joan’s life at the church. In lieu of flowers, contributions may be made to the Compassus Living Foundation in memory of Joan.

The family of Joan Keenan created this Life Tributes page to make it easy to share your memories.

Send flowers to the Keenan family.