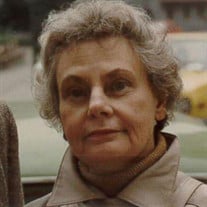 Jeannette Emilie (Lester) Nyrop passed away peacefully on January 10, 2019, in Columbia, MO, at the age of 90, surrounded by her family and her beloved orange cat, Pekoe. Jeannette was born on December 6, 1928, in New York City to Alfred Jeremiah Lester and Florence (Nightingale) Lester. Jeannette’s love for the theater was kindled in high school, and she pursued a BA degree in Drama at New York University. That’s where she met Danish-born Flemming E. Nyrop, a graduate student in the Drama Department. They married in 1950 and settled in Boston. Jeannette was one of the victims of the Polio Epidemic of the early 1950s but was able to recover her strength and care for her 2 young daughters, Siri E. and Kirsten A. When a career in theater proved inadequate to support a family, Flemming joined the newly created United States Information Service in 1957, and the young family began a life of travel. Jeannette learned to make a new home every few years as they moved from Thailand to Germany (where daughter Lise A. was born), Indonesia to Norway. It was a life of adventure and challenges. Jeannette and Flemming retired to Alexandria, VA. Flemming passed away in 2006, and after spending a few years as Siri’s neighbor in Washington, DC, she moved to Columbia. MO, in 2014, close to Lise and her wife, Tam. Jeannette was preceded in death by husband Flemming and sister Marie. She is survived by her daughters: Siri, Kirsten (and life partner, John), Lise (and wife Tam), and nephew Jeff Postel (and life partner Sadie). Jeannette was an avid reader, loved cats and had a wicked sense of humor. Friends enjoyed her anecdotes of life in the foreign service and her sharp take on politics. Just days before she passed, she asked Lise, “What’s the latest on Trump?” Lise reminded her that he wanted to build a wall. “Well, then he should go to Walmart,” our mother responded. We will miss her dearly.

Jeannette Emilie (Lester) Nyrop passed away peacefully on January 10, 2019, in Columbia, MO, at the age of 90, surrounded by her family and her beloved orange cat, Pekoe. Jeannette was born on December 6, 1928, in New York City to Alfred Jeremiah... View Obituary & Service Information

The family of Jeannette Nyrop created this Life Tributes page to make it easy to share your memories.

Send flowers to the Nyrop family.