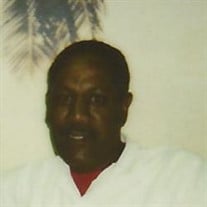 James Wilbert Richardson "AKA Kriep" passed away on January 2, 2019, in Cameron, MO. Memorial services will be held on Saturday, March 23, 2019, at H.T. May and Son Funeral Home in Columbia at 1:00 PM. Visitation will be from 12:30-1 PM Saturday... View Obituary & Service Information

The family of James Wilbert Richardson created this Life Tributes page to make it easy to share your memories.

Send flowers to the Richardson family.