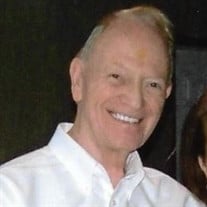 James Lee McNutt Sr., 77 of Boonville formerly of Charleston, IL. passed away Thursday August 13, 2020, at his home with his wife Lelia at his bedside. Memorial services will be held on Tuesday, September 8, 2020 at Riverside Christian church at 11:30 AM. Lelia felt so Blessed to have such a kind and caring Christian man in her life. Taking care of him in his last days was an honor. Jim was born to Jack Trowel McNutt and June Featherstun, August 30, 1942, in Charleston IL. Jim had two children, Jim Jr. and Toni, three grandchildren and one great grandchild. Jim moved to Boonville from Charleston, IL where he was born and raised on a farm of several generations. Jim was in the Air Force, worked for IBM, and struck out to open his own Insurance Agency of 40 + years in Charleston IL. He won many awards, President of Jaycees, and many community activities. Jim would tell how he would get up early to milk the cows before heading off to school. And the wonderful Sunday dinners his Mother and the women would make right down to the men cranking the ice cream. When Jim was 10 he had gotten a Bow n Arrow like most boys his age. As he was looking for targets he found many. But, the one that got him in the most trouble was putting an arrow through one of Mother's prized hens. Needless to say Mother found it behind some bushes. That evening. Mom and Dad brought it up at dinner time discussing it among themselves . Jim sat quietly at the table while Mom and Dad knew the whole time what had happened. Jim and his best friend from childhood Bob Swartz of Charleston IL had many stories to share. Jim's love for fishing was without a doubt his favorite hobby. Jim was hooked on MO the first time he came to visit Boonville. He fell in love with the KATY Trails. Jim enjoyed riding bikes, walking the trail with his beloved wife Lelia , greeting everyone he met. The trail that runs along the Mo River in Rocheport was his favorite. His three favorite places to eat were Applebee's, Freddy's Custard and Kedee's BBQ in Sedalia, he always chose the Caboose to eat in. Jim and his wife visited Wineries, B&Bs, and his favorite place Trout Hollow Lodge in Branson, overlooking Taneycomo River. The one thing he learned that the TaneyComo River is ice cold. At dawn it is foggy getting its nickname the Foggy River. Jim and Lelia would take their coffee and sit on the deck till the sun burned off the fog on the River. He was mesmerized at God's work. He would always say the clouds were God's paintbrush. Jim shared his love of his deep understanding of the Bible with his wife Lelia who learned so much more about the Bible. Even though she had strong faith from being raised in a family of three generations of Baptist Ministers. Lelia is grateful for the passion that Jim lit to use the Bible for comfort and guidance that she will use for the rest of her days.

James Lee McNutt Sr., 77 of Boonville formerly of Charleston, IL. passed away Thursday August 13, 2020, at his home with his wife Lelia at his bedside. Memorial services will be held on Tuesday, September 8, 2020 at Riverside Christian church... View Obituary & Service Information

The family of James Lee McNutt Sr. created this Life Tributes page to make it easy to share your memories.

Send flowers to the McNutt family.