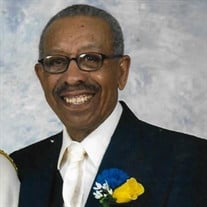 James Graves, 88, of Sedalia, passed away on Thursday, November 12, 2020, at Bothwell Regional Health Center in Sedalia. Funeral services will be private. Visitation will be from 5-7PM on Thursday at Alexander-May funeral home. In lieu of flowers the family asks that memorials be made to Ward Memorial Missionary Baptist Church. Services will be live-streamed at 1:00 PM on Friday at https://m.facebook.com/AlexanderMayFH/. The first born to the late Henry Albert and Mary Jennie Phillips Graves on August 18, 1932 in Yanceyville, North Carolina. After receiving education from the Caswell County School System. Alvin, as known to family, joined the United States Airforce, where over a period of time became Sgt. Graves. He served his country for 20 years doing various jobs. But the one he enjoyed was handling the different missiles. He'd ask, do you remember those missiles coming through town? That was me. He went on after retiring from the Air Force, to pursue again what he enjoyed. Driving. He became Owner/Operator of G&G Trucking, driving one of the 18 wheelers coast to coast. Hired drivers for the other ones. After a desire to be home he went to work for Lincoln Transportation System in Lincoln, Nebraska. You guessed it, driving. Now Jim Graves was again about serving the people. And he served well until, again retirement. Moving back to the Sedalia area, Mr. Graves, of G&G Rental, Vice. Pres. of Diversified Community Outreach, Volunteering in Partnership, Habitat for Humanity, Open Door Ministries, MRCC to name a few. " I love people " He was about serving others and no one needed to know what he'd done to help. There was never a dull moment in his life. He loved and enjoyed spending time with his 'family, friends, riding his motorcycles, camping and traveling. But the most enjoyable service of all was serving Our Lord and Savior Jesus Christ. And you saw that in his serving others. Deacon Graves, was ordained as Deacon in 1981, in Lincoln, Nebraska. Upon returning to Sedalia, he reunited with Ward Memorial Missionary Baptist Church where he served as Head Deacon, Asst. Sunday School Supt./Teacher, Laymen, and singing in the Choirs until his health declined. He started each day around 6 a. m. with quiet meditation, praying and studying God's Word, preparing for the day. He loved working with the Churches in Central District. Working for the Lord was his passion. He loved the Lord. His sayings; " Lord help me to be more like you today than I was yesterday ". And " If you talk the talk you must walk the walk " a quote from an old deacon from Waco, Tx. This is what he lived by, he didn't just tell others about the Lord Jesus, he allowed them to see Christ in his life. " Praise The Lord " And Praise The Lord he did anytime or anyplace. Over 55 years ago he walked into a Church in Lincoln, Ne. Praising the Lord and continuing to do so. Truly a man of God. He will be missed. His name changed over the years and today he yet has a new name. That name is forever. On May 19,1965 he entered into marriage to Johnnie M. Richardson, left to cherish his memories of, as he’d say over 55 years. He's also survived by five children: Pamela Graves of Decatur, Ga. , Sherry " Becky” (David) Johnson of Summerville, S.C., David Graves of Sedalia, Mo., Marcus " Marc " Graves of Lincoln, Ne., and Derek (Krista) Graves of Blue Springs, Mo. Eleven grandchildren: Tina (Kayin) Saunders, Joshua Peterson, John Hicks, Makayla Graves, Adarian Stoner, Xavier, Genesis, Treyven, Jayce, Brynlee and Presley Graves'. One brother: Albert Frank ( Mildred Louise ) Graves, Three sisters: Ersell Jeffers, Margaret Rebecca Williams, and Mary Van Edwards. Two brothers-in-law: Samuel and Bruce Richardson; Three sisters-in-law: Billie, Brenda and Ann Richardson He was also preceded in death by brother, Garnett Graves, son, Gerald Graves and two grandchildren. Memorial contributions are welcome at Ward Memorial Missionary Baptist Church, P.O. Box 565 Sedalia, Mo. 65302

James Graves, 88, of Sedalia, passed away on Thursday, November 12, 2020, at Bothwell Regional Health Center in Sedalia. Funeral services will be private. Visitation will be from 5-7PM on Thursday at Alexander-May funeral home. In lieu of flowers... View Obituary & Service Information

The family of James Graves created this Life Tributes page to make it easy to share your memories.

James Graves, 88, of Sedalia, passed away on Thursday, November...

Send flowers to the Graves family.