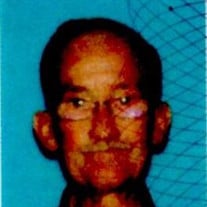 James R. Bradshaw, 75, of Sedalia passed away on Friday, June 30, 2017 at his home surrounded by his family. A graveside service will be held on Wednesday, July 12, 2017, at 11:00 AM at Crown Hill Cemetery in Sedalia. James Robert Bradshaw 75 of Sedalia, Mo passed away Friday June 30, 2017 at his home. The son of Paul and Catherine Bradshaw he was born August 26, 1941 in Marshall, Mo. He attended the Marshall Mo. Schools. James was united in marriage to Faye Gearheart on October 29, 1977 and to this union a family was formed. Tammy, Diana, and John. James is survived by his wife Faye of the home. Son Tommy Bakert and wife Michelle of Pontoon Beach, Ill., daughter Diana Brummet of Springfield, Mo., son John Bakert of Eldridge, Mo., a sister Mary Etta Duffy of Sedalia, Mo. A brother Don Bradshaw of Warsaw, Mo. Grandsons Samuel, Michael & John Jr. granddaughters Christina, Heaven, & LaKrista, great grandchildren Aria, Brielle, Dominic & Kayden. Several nieces and nephews. He was preceded in death by his parents, one brother, Paul and one sister, Carol Ann. James and Faye spent all their married life in Sedalia, Mo. James worked at the Marshall State School in the food service department. He also worked construction in several different areas. He worked at Bothwell hospital for several years in the janitorial department until his health no longer permitted it. James enjoyed watching football and basketball games. He was an avid Nascar fan! When the grandsons had their games, you could always bet James was right there camcorder in hand! James was always excited to have the great grandchildren over to play cars and Barbies. James loved his pets also, rarely did you ever see James without his faithful companion "Bat Man" by his side. James' favorite nightly ritual was saying his nightly prayers for his family, friends and whoever needed a prayer.

James R. Bradshaw, 75, of Sedalia passed away on Friday, June 30, 2017 at his home surrounded by his family. A graveside service will be held on Wednesday, July 12, 2017, at 11:00 AM at Crown Hill Cemetery in Sedalia. James Robert Bradshaw... View Obituary & Service Information

The family of James R. Bradshaw created this Life Tributes page to make it easy to share your memories.

James R. Bradshaw, 75, of Sedalia passed away on Friday, June...

Send flowers to the Bradshaw family.