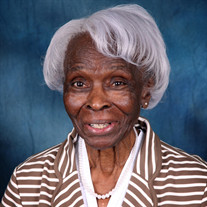 Ida Moss, 89, of Columbia, Mo., formerly of Albion, MI. was welcomed into the arms of Jesus on Friday, February 9, 2018 at the Neighborhoods by Tiger Place retirement facility. Services will be held on Friday, February 16, 2018 in Michigan. Mrs. Ida M. Moss was born May 3, 1928, in Blytheville Arkansas to the late Fred and Evelyn (Watkins) Williams. Ida spent her early years in Arkansas, Missouri, and Southern Illinois. Ida’s elementary and early junior high school years were spent in Caruthersville Missouri. She attended Douglas High School in Mounds, Illinois. In the Spring of 1947, the Williams family moved to Albion, Michigan. Ida graduated from Washington Gardner High School in June of 1949. She attended Jackson Business University and graduated from Jackson Community College. Ida worked for Corning Glassworks in Albion, Michigan in the early 1950s. She later worked for the Jackson County Sanitarium as a secretary. She eventually served as a legal secretary with the Jackson County Friend of the Court, retiring from that position in the mid-1980s. Ida was one of five sisters and three brothers of the Williams family. They were a very close-knit family and regularly gathered for family reunions. The shared values they grew up with emphasized both kindness to others and readily helping those in need. They also shared their love for God, each working faithfully in various capacities within their local churches. Mrs. Moss’s life was centered around her faith and characterized by servant leadership. In the late 1950s, she served as a youth leader within her religious denomination, traveling to various local churches to set up and support youth ministries. She was appointed as a District Missionary in 1986 and elevated to Assistant State Supervisor in 2001. She served faithfully in those roles until 2011 when she moved to Columbia, Missouri due to health challenges. In 2012, she was emeritized. She is preceded in death by her parents Fred and Evelyn (Watkins) Williams; her beloved husband, Elder Lewis B. Moss; son, Edwin Maurice; bonus daughter, Ernestine Jenkins; sisters, Elizabeth Lee Joplin, Vertie Lou (Nathan) Johnson, Vergie (Leonard) Berry; brothers, Fred (Kate) WIlliams, Jr., Roosevelt (Vinnie) Williams and Clarence (Donna) Williams. Left to cherish her memory are her son Waldon (Janet) Moss; her bonus daughters Wanda (Richard) Holmes, Oletha (Alex) Curling, and Luella (Elmer) Hess; her bonus sons Lewis Moss, Jr., Melvin (Ella) Moss and Willis Moss, Sr.; her sister Lorene (Ronald) Gant; and a host of grandchildren, great-grandchildren, great-great grandchildren, nieces and nephews, great-nieces and great-nephews, great-great-nieces and great-great-nephews, cousins, and friends. Heaven is rejoicing as the Father receives her home. Well done, good and faithful servant!

Ida Moss, 89, of Columbia, Mo., formerly of Albion, MI. was welcomed into the arms of Jesus on Friday, February 9, 2018 at the Neighborhoods by Tiger Place retirement facility. Services will be held on Friday, February 16, 2018 in Michigan. Mrs.... View Obituary & Service Information

The family of Ida Moss created this Life Tributes page to make it easy to share your memories.

Send flowers to the Moss family.