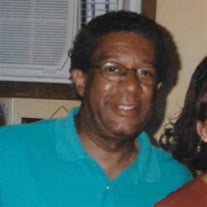 Henry White, 73, of Marshall, MO., passed into eternity at Boone Hospital Center in Columbia, MO. Funeral services will be held on Tuesday, May 16, 2017 at 11 AM at Life Church in Slater, Missouri. A visitation will be held from 10-11 AM at the church on Tuesday. Henry Theodore White, son of the late, Reverend Moses White and Etta Mae Williams (White), was born on August 3rd, 1943 in Saline County, Missouri. He attended Gilliam Elementary School and was a graduate of Slater High School. Henry professed his faith in Jesus Christ and was a member of the Second Baptist Church of Slater, where he was a choir member. After graduating from High School, Henry joined the U.S. Army, where he was stationed in Korea. After honorable discharge, he worked numerous jobs which began with Farm work with his dad, Hay fields, and as a DA-3 supervisor at the Marshall Rehabilitation Center. After retirement, Henry worked part-time as a cook at Marsaline Manor in Marshall, Missouri. Henry also received a certificate of appreciation for his outstanding service and assistance which contributed to the advancement of the American Legion programs and activities dedicated to God and country. He enjoyed his family, sports, watching his children and grandchildren play sports, and woodworking. He is specifically known for building lighted churches and you could find him in his vegetable and flower garden in all seasons. Recently, Henry was attending the Life Church in Slater. He departed this life on Earth on Thursday, May 11, 2017 at Boone Hospital in Columbia, Missouri after a short illness. He was preceded in death by his parents Rev. Moses and Etta Mae White, sisters Clara Ward, Janie Smith and Anna Mae Wright, and brothers Roscoe White and Levi Lee White. His life will forever be remembered in the lives of his children Sherry White of Kansas City, Missouri, Priscilla Wright of Oklahoma, Sharon Blake of Seattle, Washington, Twila White of Seattle, Washington, Stephen Falls of San Diego, California, and Jordan White of Warrensburg, Missouri; 10 grandchildren, 23 great grandchildren, siblings Jonathan (Julie) White of St. Louis, Missouri, Joann (Ozeal) Barber of Boonville, Missouri, Alphonso (Katrina) White of Lebanon, Ohio, and a host of nieces, nephews, cousins, and friends.

Henry White, 73, of Marshall, MO., passed into eternity at Boone Hospital Center in Columbia, MO. Funeral services will be held on Tuesday, May 16, 2017 at 11 AM at Life Church in Slater, Missouri. A visitation will be held from 10-11 AM at... View Obituary & Service Information

The family of Henry Theodore White created this Life Tributes page to make it easy to share your memories.

Henry White, 73, of Marshall, MO., passed into eternity at Boone...

Send flowers to the White family.