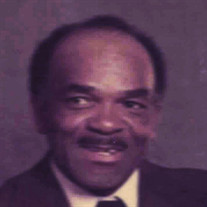 Henry Will Logan, 86, of Fulton, MO, peacefully transitioned to be with the ancestors on Friday, June 23, 2017, at his home. He was born on Feb. 25, 1931, in Englewood, MO, near Columbia, and was the eldest of seven sons of William Calvin and Voncile Anderson Logan. He was married to Arneda Elizabeth Faucett on June 14, 1952, in Fulton. To this union was born one daughter, Marian L. Logan; and two sons, Henry C. Logan and Angelo G. Logan. Henry attended grade school in Fulton where he was a member of the YPPC and graduated from Lincoln Laboratory High School in 1948. He was an avid sports fan and loved Negro League baseball in particular. He was also a longtime member of Calvary Baptist Church in Fulton where he was an original member of the ‘Cavaliers’ choir. Henry, known to family and friends as “H”, was always an achiever. He and his brothers worked together hauling hay for local farmers. He began his formal employment with the Danuser Machine Company as a shipping clerk in the early 1950’s. He then worked over five years for Epple Construction Company, and was involved in the rebuilding of the bombed-out remains of London, England’s Church of St. Mary, the Virgin, Aldermanbury, which was dedicated in 1968 in Fulton as the Churchill Memorial; construction of the geodesic dome at William Woods University and various buildings on the University of Missouri campus. In 1968, he started Logan Construction Company, which he owned and operated until retiring in 2012. Logan Construction focused on residential construction throughout mid-Missouri. “H” was a real estate developer and his passion was working his cattle farms. “H” and his wife were among a dedicated group of alumni and supporters who, in the early 1990s, purchased the Carver Elementary School building from the Fulton School District. The building served as a focal point for the black community. “H” then served as a founding member of George Washington Carver Memorial, Inc. Henry is survived by his wife, of 65 years, Arneda; daughter Marian of Fulton; two sons, Henry (Janet) of Phoenix, AZ; and Angelo of Fulton; one granddaughter Lamia of Fulton; and one grandson Cullen of Phoenix, AZ; five brothers, Russell of Fulton; Robert C. of Holt Summit; Earl of Jefferson City; George Trenton (Pam) of Kansas City; and Alvin of Fulton; one aunt, Mae Helen (John) of Fulton; and many nieces, nephews, cousins, grandchildren, grandnieces and grandnephews. He was preceded in death by his father, William C., in 1977; his mother, Voncile, in 1996; and his brother, Glenn in 1990; grandparents, and several aunts and uncles. Funeral services will be 1 p.m. Saturday, July 1, 2017 at St. James United Methodist Church in Fulton with the Rev. Henry Brewer, officiating. Burial will be at Callaway Memorial Gardens. Family and friends will be received in the Fellowship Hall of the church following burial. There will be no visitation. Memorials are suggested to a charity of the donor’s choice. Those wishing to email tributes or condolences to the family may do so at the www.htmayfuneralhome.com website.

Henry Will Logan, 86, of Fulton, MO, peacefully transitioned to be with the ancestors on Friday, June 23, 2017, at his home. He was born on Feb. 25, 1931, in Englewood, MO, near Columbia, and was the eldest of seven sons of William Calvin and... View Obituary & Service Information

The family of Henry Logan created this Life Tributes page to make it easy to share your memories.