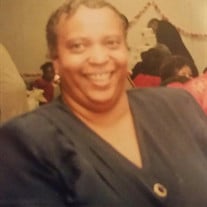 Helen Lorraine "Sister" Jackson, 72, of Jefferson City, MO., passed into eternity on Saturday, September 16, 2017, at her home. Funeral services will be held on Saturday, September 23, 2017 at 1:00 PM at the Second Christian Church in Fulton. Visitation will be from 11-1 PM Saturday at the church. Helen Jackson was born October 29, 1944, in Fulton, MO., the daughter of Theodore Nelson and Ollie Mae Glover. Being named after her aunt Helen GLover her family affectionately called her "SIster". She was a graduate of Fulton High School in Fulton, MO. She went on to pursue a career in nursing and became an LPN. Nursing was her passion and she loved giving care to her patients. During her nursing career she worked for the late Charles Cooper, St. Mary's Health Care Center, Charles E. Still Hospital, the former Memorial Community Hospital, The Department of Corrections, and many of the nursing homes in Jefferson City. Many of the CNA's that she worked with affectionately called her "Momma Helen". During their shifts, she would bring cooked food from home or have food delivered so they could eat. She loved watching TV, especially westerns, Jeopardy and especially Bishop T.D. Jakes. She loved cooking, reading novels, playing cards and dominoes. She also loved coloring in her adult coloring books. She loved her family and spending time with them. They meant the world to her. She was always wanting to do things for other people and would cook a meal for a family or friend that had lost a loved one, or simply do anything for anyone have a rough time. Big things or little she gave what she could and always from the heart. She accepted Christ at a young age and grew up in the family church which was Paris Fork United Methodist Church. She later became a member of the Oak Chapel Missionary Baptist Church under the leadership of Pastor Marion S. Mitchell. When her health began to fail and she wasn't able to get out as much, she kept in touch with family and friends on the phone. Those phone calls were the highlight of her day. She asked for and received a breast cancer wreath made by her cousin Sherri Washington. She was happy and grateful for that wreath. She had her family hang it up in her room so that she could always see it. She leaves to cherish her memory two daughters Tamika Driver and Sonja Jackson both of Jefferson City, MO., two sons Henry Adam Jackson III of Jefferson City, MO., and Charles (Patricia) Jackson of Killen , TX., two honorary daughters Paula Wright and Ruth Ann Kelley, and One honorary son Kenny Shaw, one sister Delores Ellison of Killen, TX., one aunt Leona Hamilton of Kansas City, MO., three uncles Russell Glover, Willard Glover and Donald Glover all of Fulton, MO., ten grandchildren, seven great-great-grandchildren, and a host of nieces and nephews, some of which she helped raise. She was preceded in death by her parents, one brother Kenneth Glover, one sister Margaret Glover, one sister-in-law Roberta Glover, three uncles and two aunts. Donations towards the service can be made at https://fundthefuneral.com/helen-jackson. Any gift, no matter the amount, is appreciated more than you could ever imagine.

The family of Helen Lorraine Jackson created this Life Tributes page to make it easy to share your memories.