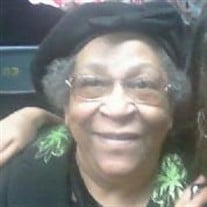 Helen Jackman, 74, of Columbia, MO., was escorted by the Angels to her heavenly father on Tuesday, January 23, 2017, at Boone Hospital Center. Funeral services will be held on Saturday, February 3, 2018 at Russell Chapel CME Church in Columbia at 1:00 PM. Visitation will be from 12-1 PM Saturday at the church. Helen Margaret Jackman, 74, of Columbia MO began her journey home on January 23, 2018 at Boone Hospital Center. She was born on May 25, 1943 in Fayette, MO, the daughter of Orville McKee and Laura Thelma Powell. She attended Lincoln grade school in Fayette and graduated from Fayette High School. After graduating Helen worked for Mrs. Margie Watson, Dean of Women at Central Methodist College. During this time she met and married the love of her life Vernie C. Jackman on November 1, 1959. From this union three sons were born. Vernie C. Jackman Jr., Lorne Pernell Jackman, and Wendell Irvin Jackman. Helen began her career at 3M company in 1971. While working full-time and raising a family she earned her bachelor's degree in business administration from Columbia College. She was in the top 10% of the graduating class. Shortly after graduating she earned a promotion at 3M to senior production control analyst. She retired from 3M in 1999 after 28 years of service. Helen has been a lifelong member of Russell Chapel CME Church. She served in various positions within the church. Most recently she served as treasurer. She was a member of the War Mothers organization. Helen played a mean first base on her softball team! As a hitter she was known to clear the bases on more than one occasion. In her retirement years Helen enjoyed pulling the handle on the penny slots at the local casino. Her phrase was, "I'm tryin' to get this money!" Helen was a friend to all, she was a gentle soul who was quick to forgive and gracious in all that she did. She strived to share with others the blessings she received. She was a devoted wife and loving mother and grandmother. Helen was the matriarch and backbone of the Jackman family. She will be missed by all. Helen is survived by her sons Lorne (Mandy) and Wendell, both of Columbia. Two granddaughters, Stephanie and Marissa Jackman of Columbia, one grandson Tyler Jackman of Kansas City, one brother Ralph Powell of Columbia, one brother in law Russell Jackman of Texas, and one sister in law Loretta Conner. She was preceded in death by her mother and father, her oldest son, Vernie Jr., her husband VC, her sisters Winnie Lou and Mary Lee, her brother Eddie Dean Powell, and her brother in law Charles Paige. In lieu of flowers the family asks for donations to be given to Russell Chapel CME Church.

Helen Jackman, 74, of Columbia, MO., was escorted by the Angels to her heavenly father on Tuesday, January 23, 2017, at Boone Hospital Center. Funeral services will be held on Saturday, February 3, 2018 at Russell Chapel CME Church in Columbia... View Obituary & Service Information

The family of Helen Jackman created this Life Tributes page to make it easy to share your memories.

Send flowers to the Jackman family.