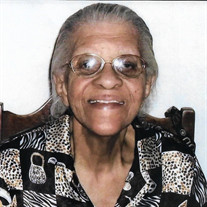 Helen Fisher, 89, of New Franklin, slept into the arms of Jesus on Thursday, February 15, 2018, at her home. Services will be held on Saturday, February 24, 2018, at 11 AM at HT May & Son Funeral Home in Boonville. There will be no public visitation. A repast will be held at Morgan Street Baptist Church after committal, please contact Sis. Eunice Wright for details regarding food donations. Helen Lou Fisher was born on August 18, 1928, to John V. Broadus and Lucille McKee in Howard County Mo. She was called home to the Lord on Feb 15, 2018. She attended grammar school in Hillsdale Mo and later graduated high school in 1949 from Sumner High School in Boonville Missouri. She was joined in marriage to Beverly Camel Fisher in 1951. Later on in life Helen met a special friend, Minister Ollie Paige, who she spent over 20 plus years with. Those years were spent on the Lance D. Henderson farm, where even tho' times were tough and some days all there was to eat , was what could be hunted or taken from the ground , Helen still managed to feed and take care of her children with what little there was. She had an abiding love for the land and the country. She was a country girl and darn proud of it. Helen was A Lifelong member of Mt Woodland A.M.E. Church in Hillsdale Mo, where she thoroughly enjoyed singing in the church choir. She loved that little old country church. Helen was employed most of her working years as a housekeeper for various families in the country and later on in the New Franklin area. After Helen moved to the New Franklin area in the 80's, her pride and joy was her little house, she could be seen over the long years tending her garden, flowers and just "piddling "around outside as she called it. She also enjoyed church, gospel singing and traveling to see her kids in Dallas Tx. Above all she loved reading and studying the Holy Bible it brought her comfort in life and it still is taking care of her now. Left behind to celebrate Helen's life are: one daughter, Pam Thomas of Springfield IL, two sons, Robert(Laverne)Fisher of Columbia Mo and Ron Fisher of Dallas TX, One granddaughter, Chasity Fisher of Dallas Tx. One special sister in law, Shirley Broadus of Columbia Mo, numerous nieces and nephews and two special friends, Eunice Wright and Anthony Ray. Preceding Helen were, two brothers, both Parents and her beloved grandson, Shaun B. Fisher

Helen Fisher, 89, of New Franklin, slept into the arms of Jesus on Thursday, February 15, 2018, at her home. Services will be held on Saturday, February 24, 2018, at 11 AM at HT May & Son Funeral Home in Boonville. There will be no public visitation.... View Obituary & Service Information

The family of Helen Fisher created this Life Tributes page to make it easy to share your memories.

Helen Fisher, 89, of New Franklin, slept into the arms of Jesus...

Send flowers to the Fisher family.