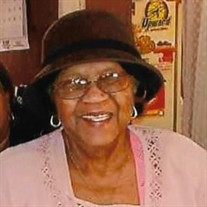 Helen Butler, 84, of Sedalia, MO, passed away on Sunday, May 3, 2020 at Bothwell Regional Health Center. Services will be held at 2:00 PM at Burns Chapel Freewill Baptist Church in Sedalia. Visitation will be held from 12:00 to 2:00 PM on Saturday at the church. Helen Verlee Butler, 84, of Sedalia, MO, passed away May 3, 2020 at Bothwell Regional Health Center in Sedalia. She was born on September 16, 1935 in Sedalia to the late Johnnie and Lucille Ann Roseman. On February 9, 1957 she was united in marriage to her soul mate who preceded her in death Thomas Butler, Jr., in Sedalia, MO where they raised their eleven children. Helen and Thomas were married for 49 years. Helen was raised and educated in Sedalia, MO. She was a graduate of Lincoln Hubbard school. She was a hard-devoted worker that took pride in what she did. She worked for Swift and J.A. Lamys. She also worked for The City of Sedalia as a school crossing guard from August 16, 1988 until she retired on August 16, 2017. She loved her work and caring for the children who crossed her path. Helen loved attending Sunday school and church on Sundays at Burns Chapel Free Will Baptist Church. She was an active member of the church and served on the motherboard. Helen was also an active member of her community and received numerous awards for her services within the community. She was an active member in numerous clubs such as NAACP and Red White and Blue Club. Some of her favorite activities included: watching Monday night wrestling, having family gatherings, doing word search puzzles, and cooking for her family. Helen was an avid sports fan. She loved cheering on her boys in blue (Kansas City Royals) and watching the Kansas City Chiefs on Sunday with her grandchildren. Her greatest love though was spending time with and attending her grandchildren’s activities. She is survived by her five sons: Thomas (Didi) Butler of Riverside, MO, Leonard Earl (Jimmi) Butler of Sedalia, MO, Howard Butler of Lucerne Valley, CA, James (Robbie) Butler of Oakland, CA, and Henry Butler of Sedalia, MO; four daughters: Virginia (Charles) Willis of Sedalia, MO, Helen (Frank) Rowland of Chicago, IL, Carolyn (Gary) Cline of Sedalia, MO, and Christel Butler of Sedalia, MO; and one sister Ella (Marshall) McDonald of Aurora, CO; and one son in law Alvin F. Kerr Jr. of Kansas City, KS; and twenty-six grandchildren, plus a host of great grandchildren, nieces, nephews, and other relatives and friends. Helen was preceded in death by her parents: Johnnie and Lucille Ann Roseman; husband Thomas Butler Jr., one son: William Butler, one daughter: Patricia Kerr, three sisters Bertha Clark, Etta Washington, Mary James; five brothers: Charles (Ted) Roseman, and William (Bill) Roseman, Edward (Buck) Roseman, Johnnie Roseman, and George Craddock (Cousin); and 2 grandchildren and four great grandchild.

Helen Butler, 84, of Sedalia, MO, passed away on Sunday, May 3, 2020 at Bothwell Regional Health Center. Services will be held at 2:00 PM at Burns Chapel Freewill Baptist Church in Sedalia. Visitation will be held from 12:00 to 2:00 PM on Saturday... View Obituary & Service Information

The family of Helen Butler created this Life Tributes page to make it easy to share your memories.

Send flowers to the Butler family.