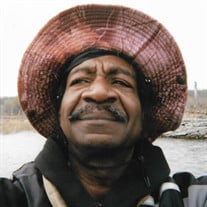 Harry Henderson, 71, of Marshall, MO., passed away on Wednesday, July 11, 2018 at The Bluffs Retirement Center in Columbia, MO. Services will be held on Monday, July 23, 2018 at 11 AM at Mt. Olive Baptist Church in Marshall. Visitation will be held from 10-11 AM at the church. Harry was the 3rd child born to the union of William H. Henderson Sr. and Nevada M. Shannon Henderson Harry was a native of Marshall and received his education in the Marshall Public Schools. After graduating from High School Harry enlisted in the Military and served 3 years in the United States Navy. Harry accepted Christ at an early age and was baptized at Mt. Olive Baptist Church. Harry was a former employee of Rival. He was retired and did odd jobs as a handyman. He leaves to cherish his memory, 2 step daughters Ryan and Danielle. 5 Step grand children Jaylen, Jayce, Zaiden, Isiah and Landon. Extra Special friends Penny, who never left his side all while he was hospitalized. And Clarence Lawrence Jr. 1 sister Zeda (Cleophas) Roberson of Columbus, Ohio 3 brothers, William “Mike” (Susan) Henderson of San Leandro, California, Clarence Henderson of Marshall who was his home care giver. Clyde (Alice) Henderson of Raleigh, North Carolina. Special Nieces and Nephews: Trice Henderson of South Dakota, Chastity and Jeremeny Williams, Elisha Dotson, Nali Cowherd, Eric Mays, Taia Mays all of Marshall. Ricky Roberson of Temple Hills, Maryland, Nevae Roberson and Cleophas Roberson III of Columbus, Ohio, Special Cousins: Clara Mae Parson of Springfield, Illinois and Gladys Guthery of Pontiac Michigan. A host of other nieces, nephews, cousins and friends to numerous to include. Harry was preceded in death by both parents and 3 brothers George E, Raymond E. and Paul K. Henderson

Harry Henderson, 71, of Marshall, MO., passed away on Wednesday, July 11, 2018 at The Bluffs Retirement Center in Columbia, MO. Services will be held on Monday, July 23, 2018 at 11 AM at Mt. Olive Baptist Church in Marshall. Visitation will... View Obituary & Service Information

The family of Harry Henderson created this Life Tributes page to make it easy to share your memories.

Harry Henderson, 71, of Marshall, MO., passed away on Wednesday,...

Send flowers to the Henderson family.