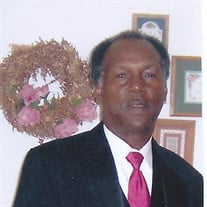 Harold Curtis, 74, of Columbia, slept into the arms of Jesus on Wednesday, December 13, 2017, at Boone Hospital Center in Columbia. Funeral services will be held on Tuesday, December 19, 2017, at St. Luke United Methodist Church at 12:00 PM. Visitation will be from 11-12PM Tuesday at the church. Harold Patterson Curtis was born on May 23, 1943, in Mexico, MO., the son of Mary F. Curtis and Eugene Johnson. Harold attended Mexico, MO. schools and graduated from Mexico High School. He was a basketball player while a student at Mexico High. Harold was full of energy and he was always on the go. He especially loved being outdoors, cutting grass and keeping things looking nice. He had few hobbies, but the one thing he enjoyed was going on rabbit hunting trips. He would go with his good buddy Paul Reynolds, and they would go in the winter months. He always said he wanted his family to experience the things that he never had a chance to do as a child. He made sure that happened for his family. Harold's working days after moving to Columbia began as a Janitor for a house cleaning company, and then he went on to become an employee at the University of Missouri, where he worked for over thirty years. Upon retiring he turned his hobby which was lawn mowing into a small business that he enjoyed. His toys as he called them were his John Deere tractors. When he was on that John Deere he was in "Heaven". On June 30, 1963, Harold was united in marriage to Joann Stemmons in Hillsdale, MO., to this union came two children. Harold attended St. Luke United Methodist Church, where he was a member of the Men's Club and enjoyed helping deliver food on special occasions. Survivors include his wife Joann Curtis of the home, sons Terry Curtis of Columbia, MO., and Todd (Vicky) Gardner of Mexico, MO., his sisters Shirley Bouie of Joliet, IL., Carolyn(Charles) Tate of Sherwood, IL., his uncles John Ocrey and James(Stella) Johnson of Columbia, MO., sister-in-law Georgia Johnson of Columbia, MO., his aunt Lena Kelly of Columbia, MO., brother-in-law and sister-in-law David and Gloria Stemmons of Fayette, MO., and several grandchildren, great-grandchildren, and a host of nieces, nephews, cousins, and friends. Harold was preceded in death by his parents, one daughter, two brothers and one sister.

Harold Curtis, 74, of Columbia, slept into the arms of Jesus on Wednesday, December 13, 2017, at Boone Hospital Center in Columbia. Funeral services will be held on Tuesday, December 19, 2017, at St. Luke United Methodist Church at 12:00 PM.... View Obituary & Service Information

The family of Harold Patterson Curtis created this Life Tributes page to make it easy to share your memories.

Harold Curtis, 74, of Columbia, slept into the arms of Jesus...

Send flowers to the Curtis family.