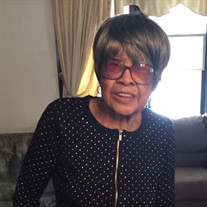 Gladys Ernestine Taylor, 89, of Kansas City, MO, passed away on Thursday, April 7, 2022 at St. Luke Hospital in Kansas City. Funeral services will be held on Wednesday, April 20, 2022 at 11Am at the Lawrence A. Jones Funeral Chapel in Kansas City under the direction of H.T. May and Son Funeral Home. Visitation will be from 9-11AM on Wednesday at Lawrence A. Jones and Son Linwood Chapel. Services will be live streamed at 11:00 AM through the HT May & Son Funeral Home Facebook page and can be found at https://www.facebook.com/htmayfuneralhome. Gladys Ernestine Taylor was born on June 4, 1932, in Kansas City, Mo to Ms. Elizabeth Mary Smith. Ernestine, who she preferred to be called, attended R.T. Coles Vocational High School in Kansas City, Mo. Upon graduation she continued her education in nursing and obtained her license in that field. She worked long hours and went on to become a private duty nurse for many powerful and famous people in the Kansas City area. Ernestine found pleasure in knitting, especially clothing articles for the kids, and her long walks outside and in the mall with long term friends and neighbors Ms. Mary (Daisey) and Ms. Terry. She enjoyed going junking at the Thrift Stores back in the day in KC and California. She found joy talking to her brother Hershel and visiting him in California. Her last conversation she remembered when she was out 15 years ago, when the doctors gave him 2 weeks to live. She would say my brother is a miracle. Last year September 14th to October 5th with her side kick Chiquita, she was in California 3 weeks visiting her brother again to relax and learning how to eat healthy. She returned home and her doctor was so pleased that her blood pressure and blood sugar were good. Ernestine’s mother died at a young age, which left her to become a mother to many while working. She then had to mother and help raise her sisters and brothers, as well as her own children. The name Ernestine spiritually means “serious, earnest and determined,” and she was certainly that in taking care of her family as a single mother and making sure she got things done her way and in her timing. She was such an independent person. She bought her first house almost 60 years ago, so that her family would have a roof over their heads. She worked hard by herself to make this happen and was very proud of this accomplishment, as it also became home to others she raised and became the Matriarch in their lives. Ernestine’s nursing skills were yet being used after she retired from being a private duty nurse for other, and she used those skills often to take care of her own children. Ernestine loved her family and spent her life working and doing for her family up to the time the Lord called and said Ernestine, it is time to rest, Thursday, April 7, 2022. Those that have preceded her in death are her children Monty Wallace, Daryl Taylor, her brother Emmitt Smith, her sisters Jamesetta Smith and Sarah Mosley, her mother Elizabeth Smith and few nieces, nephews, and great grandson. She leaves behind to cherish her memories as a devoted and loving Matriarch mother and those she raised, Wayland Taylor, Ricky Wallace (Michelle), Ricketta Wallace, Chiquita Rye, Derrick Smith, her brother Bishop Hershel Strother (Betty), brother-in-law Robert Mosley, sister-in-law Denise Smith, her grandchildren Bobby Joe Wallace, Monty Wallace Jr. (Ashley), Monte Wallace, Wayland Jason Taylor (Renee), Briana Webb (Jesse), Surrayya Clemoens, Ryan Garlington and a host of nieces, nephews, great grandchildren, cousins, friends and neighbors.

Gladys Ernestine Taylor, 89, of Kansas City, MO, passed away on Thursday, April 7, 2022 at St. Luke Hospital in Kansas City. Funeral services will be held on Wednesday, April 20, 2022 at 11Am at the Lawrence A. Jones Funeral Chapel in Kansas... View Obituary & Service Information

The family of Gladys Ernestine Taylor created this Life Tributes page to make it easy to share your memories.

Send flowers to the Taylor family.