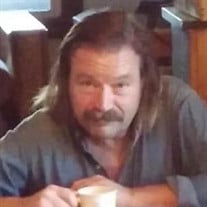 Gary “the Spirit” Edwards, beloved guest of St. Francis Catholic Worker House, died July 26, 2020 after collapsing from an abdominal aneurism out walking. He was 65. He is survived by his mother Carole, sister Linda Cockefair, three brothers Reed, Evan and Roger and Aunt Marilyn Lee. He graduated from high school, worked several jobs, had a car and lived in Kentucky, Florida, California and Illinois. Diagnosed with schizophrenia in his 20’s, he eventually lost his apartment, his car and roamed over Illinois before crossing the Mississippi, mysteriously arriving in Columbia to walk our streets nearly 30 years. Some knew him as the “Walking Man.” He often performed compulsive rituals and retraced his steps before crossing intersections in every type of weather. Very shy; his reasons for walking daily he kept to himself. It seems he needed to mull things over while he walked. Several years passed before we learned his name. No one knew where he stayed overnight in those early years, but we knew he ate at Loaves and Fishes Soup Kitchen. He fell asleep on a couch one evening at St. Francis House and spent the next 20 years resting from his daily journeys. He wore out a dozen couches or more. During bad weather, we asked him to stay in, but something compelled him to walk even then. He saw more bad weather than a postal worker but unlike them, he had no truck and received neither pay nor pension. He wore hand-me down clothing donations and wore out countless pairs of shoes. His shy nature evoked sympathy and compassion from others. But he kept his sorrows and joys to himself and we could only imagine what these were. The Greeks used to say that people in need were the ambassadors of the Gods, sent to test our compassion and understanding. That is who Gary was to us and the volunteers who fed him at Loaves and Fishes Soup Kitchen, and Columbian’s who passed him on the MKT Trail or drove past him with his determined, anxious demeanor. He must have encountered thousands of people over the years. On St. Francis House’s Facebook page, dozens who encountered Gary on the street or trails, wondered what it might be like to walk in his shoes. A member of the MU track team wrote that team members on training runs would see him regularly on the trail. They called him “Pre” because of his resemblance to Steve Prefontaine, a famous Olympic long-distance runner from Oregon. His family found him on the internet about 6 years ago and sent him letters and money. Gary was hospitalized and given meds in his early years but didn’t like the side-effects. We offered to make psych appointments for him and help renew Social Security benefits he used to receive before coming to Missouri. He preferred to rely on the kindness of others. He mastered “social distancing” before it was cool. There will be a memorial at the MLK shelter off the MKT trail August 29th at 1 pm to share stories and celebrate his life.

Gary &#8220;the Spirit&#8221; Edwards, beloved guest of St. Francis Catholic Worker House, died July 26, 2020 after collapsing from an abdominal aneurism out walking. He was 65. He is survived by his mother Carole, sister Linda Cockefair, three... View Obituary & Service Information

The family of Gary Edwards created this Life Tributes page to make it easy to share your memories.

Send flowers to the Edwards family.