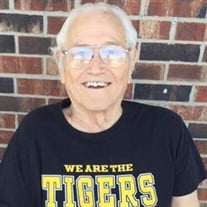 The link to donate in memory of Ezra “Fuzzy” Nichols is: https://www.formstack.com/forms/index.php?1160298-aucwUZ1Yjk Ezra ‘Fuzzy’ Nichols, Jr., 85, of Columbia, passed away peacefully on Thursday, Feb 1, 2018, at Columbia Manor with family by his side. A celebration of life will be held at a later date. Fuzzy was born 6-18-32 to Ezra Price Nichols and Katie (Caruthers) Nichols in Columbia. Raised in Columbia, he graduated from Hickman High School in 1950. He was drafted to serve the U.S. Army in Okinawa from 1952 - 1954. After returning, he married Sandy (Williams) Nichols in 1959 and raised four children. Fuzzy barbered for over three decades, where people came for a $5 hair-cut and to listen and laugh at stories. He enjoyed hunting, fishing, and gardening with his brother Kenny. In 1986, Fuzzy met his loving girlfriend, Phyllis Willingham, with whom he spent the rest of his life. Fuzzy was proud of his children Doug (Jackie) Nichols, David (Julie) Nichols, Dan (Joan) Nichols and Denise (Clark) Winslow, his nine grandchildren and four great grandchildren. He is also survived by brother Kenny Nichols, sister Marjorie Beaman and many nieces, nephews and cousins. Fuzzy was preceded in death by his parents, first wife Sandy (Nichols) Mazzocco, brothers; Lewis ‘Tubby’ and Billy Nichols. Fuzzy was a loving, caring father and friend to all - he had a contagious smile and a great sense of humor. He will be missed by many. In lieu of flowers, contributions may be made to Hospice through the Boone Hospital Foundation, in memory of Ezra Nichols, c/o 1600 E. Broadway, Columbia, MO 65201. The link to donate in memory of Ezra “Fuzzy” Nichols is: https://www.formstack.com/forms/index.php?1160298-aucwUZ1Yjk

The family of Ezra Nichols created this Life Tributes page to make it easy to share your memories.

The link to donate in memory of Ezra “Fuzzy” Nichols is:
https://www.formstack.com/forms/index.php?1160298-aucwUZ1Yjk

Send flowers to the Nichols family.