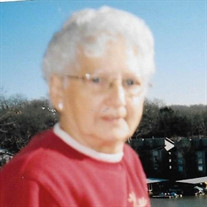 Evelyn B Belt-Stock, 89 years, of California, Missouri, passed away peacefully on Friday, April 24, 2020 at her home in California, Missouri. She was born on January 2, 1931 in Centertown, Mo,. the daughter of Dewey and Millie Vogel Gibler. She was married on June 6, 1947 to Gene Belt who preceded her in death on February 22, 2002. She married Dennis Stock on August 14, 2005 who was at her bedside when she passed into heaven. A lifelong resident of the Central Missouri area, Evelyn spent many years on the lovely farm in Centertown, Missouri owned by her and Gene. They raised their five children there and enjoyed the quiet country life while working hard in the garden, fruit orchard, and raising cattle, hogs, and chickens. Her children remember the good times they had visiting the St. Louis Zoo, going to the drive-in theater, long walks in the woods to hunt mushrooms and pick greens, and sleigh rides when the roads iced over. Later in life she enjoyed traveling around the U.S, and taking long drives on country roads. Survivors include: husband Dennis Stock, four daughters and one son, Carol McDonald of Frisco, Tx, Cathy Clemons of Plano, Tx, Corliss Hentges of Centertown, Mo, Cindy Tillman of Tampa, Fl, and Michael Belt of Centertown, Mos; two sisters, Rita Connell of Jefferson City, Kilo, and Catherine Vaughan of Lohman, Mo,; twelve grandchildren, fourteen great-grandchildren, ten great-great-grancichildren„ and many nieces and nephews. She was preceded in death by her parents, Dewey and Millie Gibler; her husband, Gene; two sisters, Laverne Wadley-Carson and cola Jean Wright; four brothers, Richard Giblet-, William Gibler, Roy Lee Gibler, and James Dewey Gibler, Due to the CO ID-19 pandemic, a Memorial will be held at a later date.

Evelyn B Belt-Stock, 89 years, of California, Missouri, passed away peacefully on Friday, April 24, 2020 at her home in California, Missouri. She was born on January 2, 1931 in Centertown, Mo,. the daughter of Dewey and Millie Vogel Gibler.... View Obituary & Service Information

The family of Evelyn Stock created this Life Tributes page to make it easy to share your memories.

Send flowers to the Stock family.