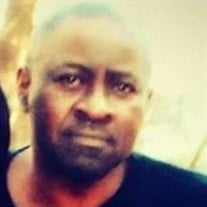 Evans Smith, 57, of Columbia, MO. passed into eternity on Tuesday, November 7, 2017 at University of Missouri Hospital. Memorial services will be held on Saturday, November 18, 2017 at 11:00 AM at H.T. May and Son Funeral Home in Columbia. There will be no visitation. Evans David Smith was born June, 29th, 1960 in New Franklin, Mo to the parents of Mary L. Smith and Ernest Smith. Evans preceded in death by his parents Mary L Smith and Ernest Smith and brother Stephen Bowman. Evans gave his life to Christ some time before he became sick and again 4 years ago. Evans was educated through New Franklin Public Schools. Throughout his life Evans worked at several locations as “Main cook” including: Sorority Homes, Columbia College and most proud moments his own business on Lyon St. He also did lawn care around the whole community of Columbia rather you had the funds or not he always wanted people’s lawn care to look nice. Evans loved to cook for any and everyone that came to his home or that he visited. Better known for making the best catfish amongst many other things as well. He enjoyed laughing and sharing memories of growing up, Spending time with his daughter Puhder and step-grandchildren. Evans had many names he went by: Evans, Smitty, Herdie, Hurlie, Catfish, and on a regular “Pape”. He enjoyed watching his shows on MeTV, Andy Griffith and his Western Shows. Evans loved eating ice and spending time with his family. He cherished the special times and memories he built with his step-grandson “Man Man” (Treveon), Nephew Jason Turner and sister “Tom” Debbie Turner and Christine Maupin. ​Evans leaves to cherish his memory his only child Stephany (Puhder) Williams of Columbia, Mo, 3 Step Kids: Shearley Taylor of Columbia, Mo, Shelley Williams of Columbia, Mo and Francheska Williams of Columbia, Mo. 15 Step-Grandchildren ,2 Step- Great-Grandchildren. 5 sisters: Sharon Turner of Detroit, MI, Connie Simmons (Paul) of Columbia, Mo, Jenny Turner of Columbia, Mo, Debbie Turner of Columbia, Mo, Jocelyn Smith of Columbia, Mo. 3 Brothers: Marvin Smith (Shelly) of Columbia, Mo, Mike Smith of Columbia, Mo, Kendal Smith of Columbia, Mo and a host of nieces nephews and great nieces and nephews.

Evans Smith, 57, of Columbia, MO. passed into eternity on Tuesday, November 7, 2017 at University of Missouri Hospital. Memorial services will be held on Saturday, November 18, 2017 at 11:00 AM at H.T. May and Son Funeral Home in Columbia. There... View Obituary & Service Information

The family of Evans Smith created this Life Tributes page to make it easy to share your memories.

Evans Smith, 57, of Columbia, MO. passed into eternity on Tuesday,...