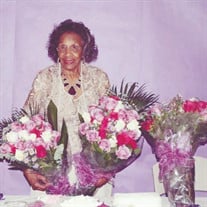 Esther Mae Perry, 96, of Boonville, slept into the arms of Jesus on Monday, May 24, 2021, at University of Missouri Hospital in Columbia. Services will be held on Thursday, June 3, 2021, 11:00 AM at St. Matthews AME Church. The visitation will... View Obituary & Service Information

The family of Esther Mae Perry created this Life Tributes page to make it easy to share your memories.

Esther Mae Perry, 96, of Boonville, slept into the arms of Jesus...