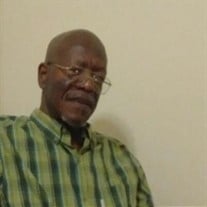 Elmer L. White, 74, of Columbia entered into the Master's paradise on Thursday, April 6, 2017, at his home. Funeral services will be held on Thursday, April 13, 2017, at 11 AM at Victory Baptist Church in Columbia. A visitation will be held from 10 AM to 11 AM at the church. Elmer L. White was born the second eldest child, on November 12th, 1942, to the union of Clarence and Jerline White. He passed away peacefully, in the comforts of his own home, Thursday, April 6th 2016. Elmer appeared to have been “laying back taking it easy,” as he would often say, when he was called home. Elmer was educated in the St. Louis Public School System from grade school, through his high school graduation, from Vashon High. After graduation, Elmer decided to serve our country and joined the Air Force; where he was stationed at Lackland Airforce Base in San Antonio, Texas. After an honorable discharge, Elmer traveled to Detroit, Michigan, where he remained for over a decade, working as a laborer. After leaving Dertroit, Brotha continued to travel, residing in Minnesota, for a number of years. Eventually Elmer relocated to Columbia, MO, where he has remained up until his final day. Some favorite pass times of Elmer’s were playing cards, shining his shoes, listening to the blues, boxing and drinking his Mickey’s. He is preceded in death by his parents, Clarence and Jerline, his sister Dorothy, his brothers Dan, Carl, Michael and Leo, and his niece Renetta. He is survived by his loving sister Carlene White, and brother Edward White, two sister in laws, Vicki and Beatrice, and a host of cousins, nieces and nephews.

The family of Elmer L. White created this Life Tributes page to make it easy to share your memories.

Send flowers to the White family.