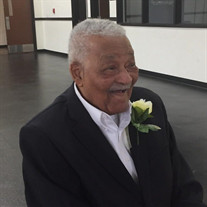 Edward L. Williams, 89, of Columbia, MO, passed into eternity on Thursday, May 16, 2019, at The Bluffs Retirement Center. Visitation will be held Tuesday, May 21, 2019, from 6-7:30 PM at the Progressive Missionary Baptist Church. Visitation will be held on Thursday, May 30, 2019 from 10:30 AM to 11 AM at Forest Tabernacle Baptist Church in Louisville Kentucky. Services will be held on Thursday, May 30, 2019 At 11 AM at the church. Edward Lee Williams aka “Click” was born to the union of John Henry Williams Sr. and Anna Lillian Hines Williams on August 25, 1929 in Louisville, Kentucky. He was the fifth of eight children. Edward accepted Christ at an early age, he was baptized at the Antioch Baptist Church in Louisville, Kentucky under the pastorate of Rev. Watson. Edward graduated from Central High School Louisville, Kentucky class of 1947 1/2. In 1948 he enlisted in the United States Marine Corps, and was honorably discharged. On August 12, 1950 he was united in marriage to Jacqueline Ann Simpson. To this union five children were born. He also helped to rear three grandchildren. Edward worked as a shipping clerk at Stratton and Terstegge Co. for 45 years retiring in 1994. Click as he is known to family and friends was never too busy to help those in need. He loved Louisville Cardinal Sports. He will always be remembered as a person who loved people and life. On Thursday, May 16, 2019, Edward departed this life at The Bluffs Retirement Center, he was 89 years old. He was preceded in death by his wife Jacqueline Williams, three children Alice, Sharon, and Jerry Williams, two sisters Francis Williams and Mary Johnson, four brothers John Henry Jr., James Oliver, Charles and Clifford Williams. He leaves to cherish his memory two sons Edward Lee Williams Jr. of North Highlands, CA, Rev. Roderick (Denise) Williams of Columbia, MO, grandchildren Andre, Trienda, Sailvon, Niesha, Roderick Jr., Joshua, nine great grandchildren, three great-great grandchildren, one brother Gilbert (Gilley) Williams of Milwaukee, WI and a host of other relatives and friends.

Edward L. Williams, 89, of Columbia, MO, passed into eternity on Thursday, May 16, 2019, at The Bluffs Retirement Center. Visitation will be held Tuesday, May 21, 2019, from 6-7:30 PM at the Progressive Missionary Baptist Church. Visitation... View Obituary & Service Information

The family of Edward L Williams created this Life Tributes page to make it easy to share your memories.