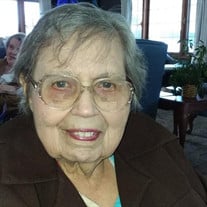 Earline McGuire, 92, of Boonville, MO, passed away on Friday, January 10, 2020. Visitation for Earline will be held at SS Peter & Paul Catholic Church at 10:00 AM on Tuesday, January 14, 2020 with Mass of Christian Burial following at 11:00 AM. Burial will follow in St. Martin's Cemetery. Earline Wesselman was born March 5, 1927 in Boonville, MO, the daughter of Frank Wesselman and Lorene Ziegle Wesselman. She married Raymond McGuire July 24, 1945 in St. Roses Church in Kansas City and they are the parents of eight children. Earline babysat for her family and other local families for years. Sewing, canning and gardening were some of her favorite things to do. Earline was preceded in death by four children; Ellen Caldwell, David, Dennis and Greg McGuire, and her husband Raymond McGuire. She is survived by two daughters, Gayle Lenger and Marlene Cottrell of Boonville and sons, Jerry (Mary) McGuire and Duane (Debbie) McGuire of Boonville, her son-in-law, Mancil Caldwell of Boonville, daughter-in-law, Ginny Sparks of Harrisburg, MO, and her sister Suzanne Cramer of Kansas City, MO, as well and ten grandchildren and several great-grandchildren. Memorials are suggested to SS Peter and Paul Catholic School and St. Martin's Cemetery Assn.

The family of Earline McGuire created this Life Tributes page to make it easy to share your memories.

Earline McGuire, 92, of Boonville, MO, passed away on Friday,...

Send flowers to the McGuire family.