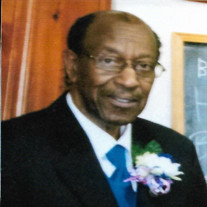 Earl Robert Walton, the third child of the late Douglas T. Walton and Mabel M. Olden-Walton, was born on Sunday October 20, 1940 in Lexington, Missouri. "Bobby" as he was called by family and friends, received his formal education from the Lexington Douglass School, and was a graduate of Lexington High School in 1958. Upon graduating from high school, he enlisted in the United States Navy, and received an honorable discharged in 1961. After leaving the Navy, Bobby worked at Lake City Ammunitions Plant. He left Lexington in 1971 to work as a "Sand Hogger" in New York City for 10 years, and also a year in Minneapolis, MN. In 1981 Bobby relocated to Oakland, CA employed as a driver for the Bay Area Rapid Transit (BART) System for over 26 years. Upon his retirement, he moved back to Lexington in 2007. Bobby gave his life to Christ at an early age, at Second Missionary Baptist Church, Lexington under the late Rev. H.C. Haynes. He was a member of the St. Paul Missionary Baptist Church in Oakland, CA. Upon his return to Lexington, he reunited with Second Missionary Baptist Church. He was a member of the church's Laymen Organization. Bobby loved his family deeply, and was an avid fan of sports. He loved playing dominoes, and the daily challenge of completing the New York Times Crossword Puzzles. After valiantly battling cancer for five years, the sunset of his life came on Sunday morning, June 3, 2018 at the Research Medical Center in Kansas City, MO with his daughter Tamala and nieces Carol and Cherry by his bedside. He leaves to cherish his memory three sons, Robert Walton, Grandview, MO; Stacy Slaughter, Independence, MO; Shaon Robinson, San Francisco, CA; two daughters Tamala Bowen, Tampa, FL and Kristy Moss, Kansas City, MO; brother-in-law, Emanuel Mason, Jr.; five grandchildren; six great grandchildren; a host of nieces, nephews and cousins. He was preceded in death by his parents; sons, Lawrence and Tarey; granddaughter, Tatianna; brothers, Johnnie and Charles; sisters, Rosemary, Rosie Maxine, Mable Hortense, Joyce and Selena. Services will be held on Friday June 8, 2018 at Second Missionary Baptist Church in Lexington at 11:00 AM. Visitation will be held from 10-11 AM at the church. In lieu of flowers the family asks contributions be made to Second Missionary Baptist Church-Lexington.

Earl Robert Walton, the third child of the late Douglas T. Walton and Mabel M. Olden-Walton, was born on Sunday October 20, 1940 in Lexington, Missouri. "Bobby" as he was called by family and friends, received his formal education from the... View Obituary & Service Information

The family of Earl Robert Walton created this Life Tributes page to make it easy to share your memories.

Send flowers to the Walton family.