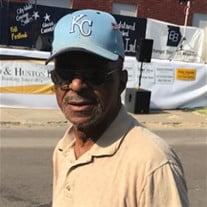 Duain Johnson, 80, of Marshall, Missouri, passed away on Sunday, December 12, 2021, at his home surrounded by his family. Services will be held on Saturday, December 18, 2021, at 11:00 AM at Mt. Olive Baptist Church in Marshall. Visitation will be held from 10:00 AM to 11:00 AM at the church on Saturday. Services will be live streamed through the HT May & Son Funeral Home Facebook page and can be found at https://www.facebook.com/htmayfuneralhome. Duain Robert Johnson was born July 9th, 1941, to Samuel L. and Fannie B. Johnson. He was the eighth of eight children (the baby). Being the youngest and the shared love that he received from his siblings was the reason he loved his family so much. He loved being in the presence of family and never missed an opportunity to visit them in Marshall, Mo, St. Louis, Mo, Sacramento Ca. and Denver, Co. Duain spent most of his life in Marshall Missouri, attended Lincoln School and later moved to Casper Wy. He held many jobs to include enlisting in the Army National Guard. He married Betty S. Williams in April of 1973 and in this union had five children. He was employed at Wilsons/Tysons Foods of Marshall Mo for over 15 years missing very few days and always an hour early for work before retiring. His after-retirement job was held at the Isle of Capri Casino where he was known for his hard work and notably recognized as employee of the month before truly retiring. He loved his grandchildren and was known as “Papa” which meant to him taking and picking up his grandchildren from school, sports, and dance lessons. He loved spending time with his children and grandchildren and preparing dinner and grilling out were some of his favorite times. One of his other loves was going to play bingo with his late sister Mollie, and any other family member that wanted go. Besides a liking for bingo, he also enjoyed scratching a few lottery tickets in his time. He also found a liking for fishing and hunting. Duain departed this life on December 12, 2021. He leaves to celebrate his memory his loving wife Betty S. Johnson, his five children Paula S. Johnson of Carrollton Mo., Larry (Cindy) D. Johnson of Marshall, Sharon K. Williams of Lee’s Summit, Cheryl C. Johnson of Marshall, Mo, Mitchell L. Johnson of Marshall. He also leaves nine grandchildren Marquilla S. Johnson of Marshall Mo., Robert L. Johnson of Aurora Il., Monica A. Johnson of Columbia, Mo., Michael G. Johnson of Marshall Mo., Haleigh J. Johnson of Delmar, Ia., Xavier L. Johnson of Delmar Ia., Brandon D. Johnson of Marshall Mo., Tamika D. Chess of Marshall Mo., Cedric E. Chess of Excelsior Springs, Mo., and several cherished great-grandchildren. He leaves in his memory his beloved bothers Samuel (Rosie) L. Johnson Jr. of Sacramento Ca. Thomas (Emma) F. Johnson, of St. Louis, Mo., and his beloved sister Eva Mae Gray of Denver Co. and several beloved and cherished nieces and nephews. He also leaves a host of friends. Preceding him in death were his parents Samuel L. and Fannie B. Johnson, three sisters, Pearl Lee Lawson, Mary Catherine Johnson, Mollie Bell Smith, and one brother James Kenneth (Brother) Johnson. Duain Robert Johnson will be greatly missed by his family and friends, but he will never be forgotten.

Duain Johnson, 80, of Marshall, Missouri, passed away on Sunday, December 12, 2021, at his home surrounded by his family. Services will be held on Saturday, December 18, 2021, at 11:00 AM at Mt. Olive Baptist Church in Marshall. Visitation will... View Obituary & Service Information

The family of Duain Johnson created this Life Tributes page to make it easy to share your memories.

Duain Johnson, 80, of Marshall, Missouri, passed away on Sunday,...