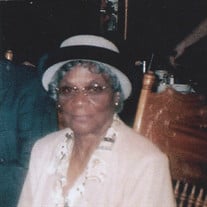 Dorothy Daniels, 93, of Fulton, passed away on Sunday, June 4, 2017 at Fulton Nursing and Rehab in Fulton, Missouri. Funeral services will be held on Saturday, June 17, 2017 at St. James United Methodist Church in Fulton at 1:00 PM. Visitation will be from 11-1PM Saturday at the church. Dorothy Scott Daniels beloved mother, grandmother, and great-grandmother departed this life on June 4, 2017. Dorothy was the only child born on June 12, 1923 to Baxter and Georgia Brown Scott. She attended Lincoln University High School. She graduated from a rural school in Boydville, MO. in 1937. Mrs. Daniels joined Paris Fork Church at an early age and served on different offices of the church. Dorothy retired from the Fulton State Hospital as a psyche aide I in1986. She has lived in Callaway County all of her life. She married Henry Daniels(deceased). She had several children Cecile, Clifford, Ronald, Bonnie, Sheila, Darryl and Herbert. Dorothy loved her family and taught them to love the Lord. She loved people and was always willing to help and do whatever she could to help. She always enjoyed attending all of the churches. She put her faith in God. She leaves to mourn her passing two daughters Bonnie Faye (Charles) Wells, of Sacramento, CA, Sheila Hernandez of Tampa, FL., four sons Clifford Wayne Scott and Ronald Lee Scott both of Lancaster, CA., Darryl Johnson of Fulton, MO., and Herbert "Junebug" Johnson of Columbia, MO., one step-son Henry Johnson of Denver, CO., and a host grandchildren and great-grandchildren. She was preceded in death by her parents, her husband Henry R. Daniels and her daughter Cecile Dickerson in 1999, one step-son Fruttie James Johnson and her son-in-law Edwin Hernandez., and her step-daughter Laura May Lewis.

Dorothy Daniels, 93, of Fulton, passed away on Sunday, June 4, 2017 at Fulton Nursing and Rehab in Fulton, Missouri. Funeral services will be held on Saturday, June 17, 2017 at St. James United Methodist Church in Fulton at 1:00 PM. Visitation... View Obituary & Service Information

The family of Dorothy Daniels created this Life Tributes page to make it easy to share your memories.

Send flowers to the Daniels family.