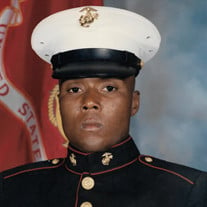 Devin Lee Hill, 52, of Columbia, slept into the arms of Jesus on Sunday, June 9, 2019 at Boone Hospital Center surrounded by his loving family. Funeral services will be held on Friday, June 14 at Parkade Baptist Church in Columbia at 11:00 AM. A visitation will be held from 5-7 PM on Thursday, June 13, 2019 at Second Missionary Baptist Church. Burial will be at the Missouri Veterans Cemetery in Jacksonville, MO. Devin was born November 29, 1966 in Columbia, MO, the son of the late Kelly Lee Hill and Ceola (Althouse) Hill. At the early age of nine years old and under the leadership of Reverend Jewell D. Jones, Sr., Devin joined Second Missionary Baptist Church on February 9, 1976. Well loved by many, Devin made numerous lifelong friends beginning at Nora Stewart Nursery School and Ridgeway Elementary School. He graduated from David H. Hickman High School in1985, where he was tri-captain of the Hickman Kewpie football team. Earning perfect attendance throughout all his years of school, Devin also received the distinguished American Legion Award his senior year. After high school, Devin decided to serve his country and enlisted in the United Stated Marine Corps, where he served four years in Camp Pendleton, CA, until his honorable discharge. After his military career, he attended DeVry Institute of Technology in Kansas City, MO, where he earned a Bachelor of Science Degree in Business Operations. At the time of his death, he was employed at MBS Textbook Exchange in Columbia, MO. An avid hunter and fisherman, Devin also loved to play poker. He was always dressed in his favorite brand, Ralph Lauren Polo; and his laugh and smile were infectious. A devoted brother and uncle, he loved to spend time with his only nephew Tre. The two of them enjoyed going out to eat and fishing. Although he did not have any children of his own, Devin loved to share his many stories about his fictitious twins, Kevin and Devin. He mentored many youths through coaching and sharing his love for outdoor sports. He was reverenced as a father figure to Dale Ganaway, Tierra Lucas, Kayla Lucas and Biagio Davenport. Devin also enjoyed a uniquely special relationship with Gavin Gray, who called him "Paw Paw"; and the two of them shared a FaceTime call every morning. Devin leaves to cherish his memory his mother Ceola Hill, one sister LaDonya Hill and his nephew Tre'von Hill, all of Columbia, and a host of aunts, uncles, cousins and family friends. He was preceded in death by his father Kelly Lee Hill , and grandparents.

Devin Lee Hill, 52, of Columbia, slept into the arms of Jesus on Sunday, June 9, 2019 at Boone Hospital Center surrounded by his loving family. Funeral services will be held on Friday, June 14 at Parkade Baptist Church in Columbia at 11:00... View Obituary & Service Information

The family of Devin Lee Hill created this Life Tributes page to make it easy to share your memories.

Devin Lee Hill, 52, of Columbia, slept into the arms of Jesus...

Send flowers to the Hill family.