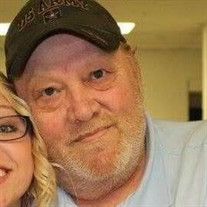 Dennis Bice,67, of Sedalia, MO. passed away on Tuesday, October 30,2018, at his home. Services will be held from 3:30 to 4:30 PM on Monday, November 5, 2018, at Antioch Fellowship Church in Sedalia. Dennis D. Bice was born on November 27, 1950 in Excelsior Springs, Missouri. He lived in Richmond, Missouri until 1969 when he joined the Army National Guard. He was in the Army National Guard from 1969 to February of 1976. He married Randolyn Richards, who was from Salt Lake City, UT on June 9, 1973. They moved to Sedalia in 1979. He worked at Kelsey-Hayes, now Maxion Wheels from September of 1983 until his retirement in April of 2013. He had many hobbies, which included Antiquing, researching family history, fishing, hunting, hunting for arrowheads, metal detecting, woodworking, being an avid bowler, and spending time with his family. He was a Chiefs and Royals fan and loved to cook and bake. He had a good sense of humor, and was a generous and loving man. Dennis leaves to cherish his memories his children Sherry Miller, Angela Blakley, Tina Bice, Dennis H. Bice, Jennifer Boyce, and Kathy Moore. He also leaves his siblings Larry Bice and Sandra Nolker, as well as numerous grandchildren, great grandchildren, nieces, nephews, and friends.

The family of Dennis Bice created this Life Tributes page to make it easy to share your memories.

Dennis Bice,67, of Sedalia, MO. passed away on Tuesday, October...

Send flowers to the Bice family.