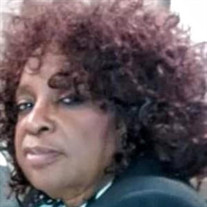 Delores Irene Glover Warfield, 66, of Killeen, TX, formerly of Fulton, MO, entered into eternity on March 4, 2020 at Advent Health Center Texas. Services will be held on Saturday, March 6, 2021 at Guiding Light Baptist Church in Fulton at 2:00 PM. Visitation will be held from 12-2 PM at the church. Masks are required. Services will be live streamed at 2:00 PM on Saturday, March 6, 2021, on https://www.facebook.com/htmayfuneralhome. She was born May 26, 1953 to the late Nelson and Ollie Mae Glover. She was preceded in death by her son, Michael Glover who passed shortly after birth. She was united in marriage to Michael Warfield who proceeded her in death. She accepted Christ as a young child and was a member of Paris Fork United Methodist Church in Callaway County. Later in life she became a Second Christian Church of Fulton, MO and attended Fulton Public Schools. She was employed for many years at Unilever, formerly Chesebrough Ponds of Jefferson City, MO. She then worked for Nowell’s grocery store in Columbia, MO and later worked as an aide for special needs adults until her health declined. Delores had a bigger than life personality, that drew people to her and she never met a stranger. She had a loving and caring nature and was always willing to help those in need. She enjoyed conversing with others and her smile and laughter was known and loved by those whose lives she touched. She will be remembered by her great cooking skills and her recipes will be cherished by her friends and family in the years to come. She passed on her love of cooking to her children. These skills she inherited from the women in her family. She was a fan of cooking shows and the QVC channel. She loved traveling to area church functions. Making people happy and receiving appreciation for her acts of kindness brought her great joy. She was an avid Kansas City Chiefs fan. She was ecstatic when they won the Super Bowl, and on her son Eric's birthday. Delores leaves to cherish her memory, her long time companion, Jerry Bryd, of Killeen, TX.; 4 children, Erik Glover of Fulton, Brent Glover of Savannah, GA, Kennette Goodman (Thomas) of Jefferson City, Melynda Cox (Lorenzo) of Clarksville, GA; Mother in law, Willa Dee Day, Sister in Law, Yolanda Williams; Brothers in law, Damon Warfield, Mark Chan Warfield, of Fulton, MO: One uncle, Horace Glover of Fulton, two aunts, Leona Hamilton of Kansas City and Jessie Glover of Fulton, MO,; Sixteen grandchildren, Tyrese Herndon, Danielle, Amari and Marli Goodman, Leandre Warfield, Malik Clark, Isaiah Herndon, Sky Glover, Tevin Drysdale, Mya Glover, Marquise Hedgepeth, Kenzie Glover, Warren Glover; great grandchildren, Malik Clark Jr., Avontaye Glover, Maia Hedgepeth One on the way; Good friend, Erma McComb of Kansas City, MO; and a host of nieces, nephews, cousins, and friends. She was preceded in death by her sister Helen Jackson and her brother Kenneth Glover.

The family of Delores Irene Glover Warfield created this Life Tributes page to make it easy to share your memories.