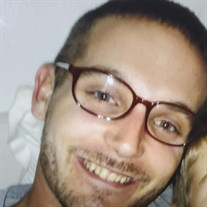 David Dale Slaughter, 31, of Columbia, M0, passed away on Sunday, April 10, 2022. A gathering of family will be held at a later date. David Dale Slaughter III, was born May 17, 1990 in Columbia, MO, to David Slaughter Jr., and Diana Baker. David came out of the womb with a great sense of humor. He was an awesome artist and later showed an interest in tattoo work on family and friends. David will be loved and missed by his family and those who knew him. He leaves behind his son David Slaughter IV of Hallsville, MO, his grandmother Verna Slaughter of Hallsville, MO, his aunt Deborah Henderson (Anthony), uncle Randy Slaughter, uncle Travis Slaughter (Jenny), his brothers Brent Slaughterm Aaron, Damien, Tristan, his sisters Amy, Crystal, Samantha, Victoria, Sunshine, Monique and Megan, his niece Kyra Slaughter, cousins Nathan Loyd, Tony Henderson and Chanelle Franklin. He was preceded in death by his father David Slaughter Jr., and Diana Baker and grandfather David Slaughter Sr.

The family of David Dale Slaughter III created this Life Tributes page to make it easy to share your memories.

Send flowers to the Slaughter family.