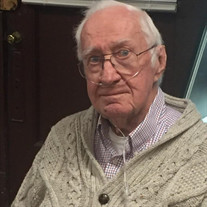 Dr. David Remington, 89, of Fayette, passed away on Saturday, May 8, 2021, at his home. Celebration of Life services will be held on Saturday, May 29, 2021 at 2:00 PM at the H.T. May and Son Funeral Home in Boonville, visitation will be from 1-2 PM Saturday at the funeral home. Services will be broadcast on Facebook Live on Saturday, May 29, 2021 at 2:00 PM at https://www.facebook.com/htmayfuneralhome. David Remington was born on February 28, 1932 in Salamanca during the great depression the son of Leo Howard and Ruby Lawhead Remington. David packed many lives into his 89 years. He was a renaissance man. He was an optometrist for 44 years. David was also a sailor, single engine pilot, scuba diver and a duck hunter. In his youth he was runner up in the New York spelling bee. During the Korean War he was an Army medic in a M.A.S.H unit. He loved dogs. He was an opera connoisseur and an art enthusiast. He climbed Long's Peak in Colorado and enjoyed canoeing, camping, and skiing. He also built five boats. Many family members reaped the benefits of his skills in carpentry and woodworking. Crossword puzzles and trivia quizzes were his daily mental exercise. He taught himself to play the guitar, banjo and harmonica. He was active in community theatre for over 20 years. He was a storyteller and master of puns, and he loved family above all else. David dropped out of high school and joined the Air Force before atending San Francisco State University. He then joined the Army during the Korean War. Once he returned, he used the G.I. Bill to get a masters degree in Educational Psychology from the University of Florida and then was a community college professor for several years. At the age of 40, he decided to reinvent himself and go back to school to become an optometrist. He graduated from Pennsylvania College of Optometry in Philadelphia and moved to Boonville, Missouri to work with Dr. Harold Creighton. He remained in practice from 1977 until her had to retire in March of 2020 due to Covid-19 and his pulmonary fibrosis. Though he was diagnosed with the condition in 2011, he refused to retire because he loved his work and was dedicated to helping his patients, especially children. He was a past President of the Missouri Optometric Association and led several volunteer trips to give eyecare and glasses to people in need in Haiti, El Salvador and Mexico. He is survived by his wife Sylvia Remington, his daughters Kirsten Schoenleber and son-in-law Mike Schoenleber, and Delia Remington, granddaughter Jessica Schmitt and he husband Paul Schmitt, grandson Conrad Schoenleber and his wife Carli Schoenleber, great-grandchildren Harvey, Roger, and Betty Schmitt, siblings Lolita Wood and her husband Dick Wood, George Remington and his wife Lynne Couch, Mary Fortin and he husband John Fortin, Ken Remington and his wife Vielka Remington and many beloved nieces, nephews, grandnieces and grandnephews. In lieu of flowers the family asks that donations be made to the Missouri Food Bank's Buddy Pack program to provide healthy meals to kids experiencing food insecurity.

Dr. David Remington, 89, of Fayette, passed away on Saturday, May 8, 2021, at his home. Celebration of Life services will be held on Saturday, May 29, 2021 at 2:00 PM at the H.T. May and Son Funeral Home in Boonville, visitation will be from... View Obituary & Service Information

The family of Dr. David Remington created this Life Tributes page to make it easy to share your memories.

Dr. David Remington, 89, of Fayette, passed away on Saturday,...

Send flowers to the Remington family.