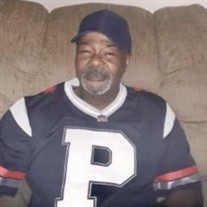 Daryl Sheley, 68, of Columbia, passed away on Tuesday, November 30, 2021, at University of Missouri Hospital in Columbia. Funeral services will be held on Friday, December 10, 2021, at 1PM at St. Paul AME Church. Visitation will be from 12-1 Friday at the church. Services will be live streamed through the HT May & Son Funeral Home Facebook page and can be found at https://www.facebook.com/htmayfuneralhome. Daryl Sheley, entered into eternal rest on Tuesday, November 30, 2021. He attended Douglass High School and was a member of t. Paul AME Church. Daryl's life transition happened in his later years of life, He began to like a life of godliness as well as enjoying his new life in recovery. He was no longer the man we use to know. He spent his time with his daughters, grandchildren, great grandchildren, and brothers. In addition, enjoyed shopping, going to church, watching movies and going out to eat. Daryl was full of laughter and joy. He was a new man of God. Daryl showed his children, grandchildren and great grandchildren that he could be the best father, grandfather and great grandfather, brother, uncle that he could be. Daryl's family was his pride and joy. Daryl leaves to cherish his memory; three daughters: Christina Stapleton, Jennifer Wall and Darylicia Wilkerson and one son Daryl A. Sheley, Jr. Four Brothers: Lorenzo Lawson, Rodney Sheley, David Sheley and Dale Sheley. Thirteen Grandchildren, and a host of great grandchildren, one niece Ronnika Gardner. Daryl was preceded in death by parents William and Helen Sheley, Myra Gardner, Shery Sheley, Darrell Anthony Taylor, and daughter Monique Graves.

Daryl Sheley, 68, of Columbia, passed away on Tuesday, November 30, 2021, at University of Missouri Hospital in Columbia. Funeral services will be held on Friday, December 10, 2021, at 1PM at St. Paul AME Church. Visitation will be from 12-1... View Obituary & Service Information

The family of Daryl Sheley created this Life Tributes page to make it easy to share your memories.

Daryl Sheley, 68, of Columbia, passed away on Tuesday, November...

Send flowers to the Sheley family.