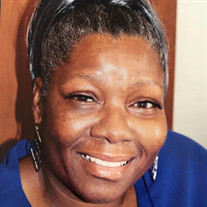 Cynthia R. Nelson, 53, of Columbia, MO., passed into eternity on Wednesday, March 28, 2018, at Boone Hospital Center. Funeral services will be on Saturday, April 7, 2018, at 1:00 PM at St. Luke United Methodist Church. Visitation will be from... View Obituary & Service Information

The family of Cynthia Renee Nelson created this Life Tributes page to make it easy to share your memories.

Send flowers to the Nelson family.