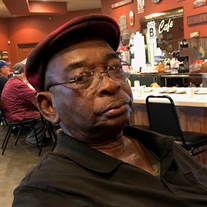 Curtis Chambers, 84, of Boonville, slept into the arms of Jesus on Thursday, February 14, 2019 at his home. A memorial service will be held on Friday February 22, 2019 at 1:00 PM at HT May & Son Funeral Home in Boonville. Curtis Monroe Chambers... View Obituary & Service Information

The family of Curtis Chambers created this Life Tributes page to make it easy to share your memories.

Curtis Chambers, 84, of Boonville, slept into the arms of Jesus...

Send flowers to the Chambers family.