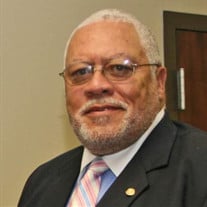 Clyde Williams, 71, of Marshall, Missouri, passed away on Tuesday, June 16, 2020, at Fitzgibbon Hospital in Marshall, Missouri. Private Services for the family will be held Saturday, June 27, 2020 at 12:00 PM at First United Methodist Church in Marshall. Visitation will be held from 11 AM to 12 PM at the church on Saturday. This funeral will be by invitation only, due to Social Distancing and rules of the church. CLYDE LOVESTON WILIAMS, JR. was the first-born son to Clyde Williams Sr. (Beaumont, TX) and Francis Plumber Williams (Lake Charles,LA) on February 9, 1949. He grew up in Beaumont, TX on the “South End” of town. He was the oldest of family of two brothers. Survived by his younger brother Abdul Badi Muhammad (Waylan Williams) was born 358 days later on February 2, 1950. Badi is a 50-year resident of Newark, NJ, specializing in Construction and Custom Jewelry creation. Clyde “Big Red” Williams grew up with multiple nicknames including Big Red and Papa as his Grandchildren would also call him Papa and his Grandson Aaron adopted the nickname as well. Clyde attended Blessed Sacrament for Elementary School and Middle School in Beaumont. While at Blessed Sacrament he also was an altar boy. He also attended Charlton Pollard High School where he was a lifetime and proud Bulldog and attended many class reunions. As a student at Charlton Pollard he was a member of the “Royales” and discovered his love of business. While at Charlton Pollard Clyde excelled in football as an All-Star defensive lineman and after graduating in 1967 received a football scholarship to Eastern Michigan in Ypsilanti, Michigan. A year later, Summer of 1968, Clyde transferred to Texas Southern University in Houston, TX where he graduated from the school of business in 1971. Clyde had an intense passion for the TSU Tigers and could be seen at many local sporting events sporting his TSU t-shirts or pullovers. Clyde achieved his greatest honor when received his MBA from Lindenwood University. Clyde’s work career began at Sears as a Management Trainee in Oklahoma City. Shortly after, Sears moved him to Houston, TX, where he also moved again to Oklahoma City, Lubbock and Joplin, MO where he was the Assistant Store Manager. Clyde’s career at Sears spanned 18 years. The second phase of his work career began in Marshall, MO where he was the Head Registrar for Missouri Valley College. He then went to work for the State of Missouri for 15 years and retired happily at the age of 65. Clyde had an intense personal conviction for civil rights and serving his community since the 1960’s. He served on the Bob James Jazz Festival Committee, taught Sunday School Police Board and Cultural Council. In the summer of 1991, he partnered with community members across Marshall to create a Vacation Bible School at North Street UMC. His proudest honor was serving as the President of the NACCP Marsaline Branch. Clyde attended many National, Regional and State conventions with a passion to keep progressing and the movement going forward. Up until Clyde’s final days, that the day before he passed on 6/15/20, he proclaimed at the Marshall City Council Meeting, “WE ARE DONE DYING!” He also spoke at the Black Lives Matter rally the weekend of 6/7/20 where he led the Voter registering, urging others to vote. Clyde felt it was very important to state your voice, by using your right to vote and utilize the ballot box. Clyde loved the beach, BBQ, gardening and fishing. He also later in life found a new enjoyment of riding his bike up and down Eastwood. He also loved tea cakes, lemon meringue pie (light on the meringue) and his wife’s gumbo. Jazz music always provided a great avenue of relaxation. He always valued his extensive jazz and reggae vinyl record collection, many bought back in the 60’s, 70’s and 80’s. Houston Oilers, all things Texas Southern and the Kansas City Royals were the passion of his intense love of sports. He would take his son to Houston Astros and Oilers games at the Astrodome and took his Son and Grandson to the Royals games during their championship run and even attended the championship parade. Clyde is survived by the love of his life Rev. Mary Johnson Williams. Clyde and Mary were high school sweethearts at Charlton Pollard and met when they were in 10th grade math class. He got a spark in his eye when he saw Mary wearing a red dress at a Christmas party. She didn’t notice him until he pawned his birthstone ring to buy her a watch. They were married on December 26, 1971 in Beaumont, TX at Blessed Sacrament Catholic Church. Traveling was a love they shared and were big fans of the sand, beach and ocean. Clyde is also survived by his first-born son Hakim S. Williams (November 30, 1973) and Aisha H. Williams (January 5, 1978). Hakim is married to Jessica Magana Williams and Clyde’s two grandchildren from their union are Gabriela Williams (13) and Aaron Williams (11). Aisha has a daughter Amayia Williams (17) who will be a Senior in High School in the Fall. Clyde is an uncle and cousin to many, and he will be deeply missed with his infectious laugh and his love of people will carry on! If you desire to show gifts of love and care please call 660-886-0100 before sending or continue sending cards, scholarship donations and love gifts to: Clyde Williams Family 522 E Eastwood Marshall,MO 65340

The family of Clyde Williams created this Life Tributes page to make it easy to share your memories.

Clyde Williams, 71, of Marshall, Missouri, passed away on Tuesday,...