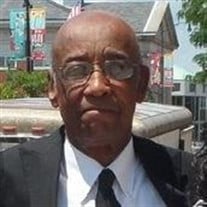 Clyde Morney, 77, of Columbia, Missouri, passed away on Thursday, March 28, 2019, at his home. Funeral services will be held on Tuesday, April 2, 2019, at Second Missionary Baptist Church in Columbia at 12:00 PM. Visitation will be held from 10-12 PM Tuesday at the church. Masonic services will be held at 11:30 AM on Tuesday at the church. Clyde C. Morney was born July 4, 1941 in Smithton, MO, the son of the late Clyde C. Morney Sr., and the late Susie Frances Kemp Morney Todd. He was a graduate of C.C. Hubbard High School the class of 1959. He was a member of the Burns Chapel Freewill Baptist Church until he moved to Columbia and became a member of Second Missionary Baptist Church. Clyde was a Past Master and member of Rising Sun Lodge #164 in Columbia, MO, member of the Grand Chapter Holy Royal Arch Masons of Columbia, Far West Commandery # 3 of Kansas City, MO, Worthy Patron of Gertrude Madison Chapter #105 Order of the Eastern Star, Marshall, MO, and Chief Engineer, Royal Lauretta Court #15 Order of Cyrene, Sedalia, MO. Clyde worked for Howard Construction in Sedalia, MO, Pittsburgh Corning, Alcan Cable for ten years, and retiring from Gardner-Denver as a Tool Room Technician in 2006 after 26 years of service. After retirement from Gardner-Denver, he drove for First Student Bus service in Columbia for five years. Surviving are his wife Gayle Smith-Morney of the home, three daughters Denise K. Morney of St. Charles, MO, Suprena Collins of Kansas City, MO, and Susan(Anthony) Schwinke of Columbia, MO, , his step-children Tina(Al) Boggess of Sedalia, Mo, Gary Willis of Sedalia, MO, Derrick Willis of Iowa City, IA, Gregory Smith of Columbia, MO, Dawn Smith of Higginsville, MO, and Eric Smith of Sparta, IA, five grandchildren, 8 step-grandchildren, 14 great-grandchildren, one sister-in-law, and a host of cousins. He was preceded in death by his father, mother, step-father, uncle, aunt, one step-grandson, and one great-granddaughter.

Clyde Morney, 77, of Columbia, Missouri, passed away on Thursday, March 28, 2019, at his home. Funeral services will be held on Tuesday, April 2, 2019, at Second Missionary Baptist Church in Columbia at 12:00 PM. Visitation will be held from... View Obituary & Service Information

The family of Clyde C Morney Jr, created this Life Tributes page to make it easy to share your memories.

Clyde Morney, 77, of Columbia, Missouri, passed away on Thursday,...

Send flowers to the Morney family.