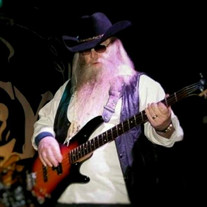 Clay Roy Richmond "The Beard of Bass", 67, of Hallsville, passed away on Sunday, November 14, 2021, at University of Missouri Hospital in Columbia. Surrounded by his loved ones. Services will be held at a later date. Memorial contributions are suggested to the American Lung Association. Clay Roy Richmond was born June 29, 1954 in Topeka, KS the son of Vernon and Lavenia Barnes Richmond. Clay graduated in 1972 from Washburn Rural High School in Topeka, KS. Clay worked for Cessna Airlines and he and his brother Joe started 2 Guys furniture repair shop where Clay made Wicker furniture. Clay became a stunt double in 1880's cowboy reenactment shows at Cowtown in Wichita, KS. He was also a member of CHAPS which was an organization for Wild West reenactment shows in Osage City, KS. Music was a very important part of Clay's life. He learned to play guitar at an early age. He played for several bands including "Prairie Majik" and bluegrass with the band "Good & Greasy". Playing his Bass guitar and being versed in many other string instruments has been his solace for many years while he battled cancer. He also enjoyed playing in his band the "Clay Creek Band" in Columbia, MO. Cherie and Clay were high school sweethearts who reconnected in 2008. They were married in 2010. Clay leaves to cherish his memory his loving wife Cherie of the home, one daughter Sheala Richmond-Cunningham(Scott) of Houston, TX, two sons Jeadan Richmond(Kaity Baer) and Joseph Richmond both of Wichita, KS, two step-children Chandra Farmer(David) of Martinstown, MO, and Alex Young(Betsey) of High Point, NC, two brothers Joe Richmond(Debra) of Lyndon, KS and Bill Richmond of Osage City, KS, two sisters Susie Richmond-Johnson of Topeka, KS, and Mary Brack of Wichita, KS, seven grandchildren Lilly Baer, Layla Richmond, Matt Givens, Taylor Givens, Chloe Gibson, Sarah Cunningham and Shauna Cunningham, 12 step-grandchildren and 7 step great-grandchildren. He was preceded in death by his parents, one brother Alan and one sister Cheryl.

Clay Roy Richmond "The Beard of Bass", 67, of Hallsville, passed away on Sunday, November 14, 2021, at University of Missouri Hospital in Columbia. Surrounded by his loved ones. Services will be held at a later date. Memorial contributions are... View Obituary & Service Information

The family of Clay Roy Richmond created this Life Tributes page to make it easy to share your memories.

Send flowers to the Richmond family.