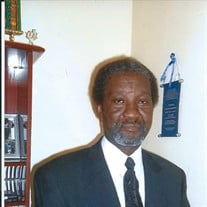 Claurence “Denny” Johnson, 62, of Columbia, Missouri, entered into eternal rest on Wednesday, January 11, 2017 at the University of Missouri Hospital. He was born on April 29, 1954 in Hopetown, Guyana, the son of Spurgeon and Queen Mary (nee Gillis) Johnson. He was the seventh of nine siblings and the loving father of four children. He first married Leslyn Joseph in 1985 and later married Yvonne Joseph in 2014. Claurence grew up in Guyana. He attended primary school in Hopetown and secondary school in Georgetown, and then attended the Teacher’s Training College and the University of Guyana, receiving a degree in Political Science and Law. He moved his family to St. Lucia, where he taught. He was also a teacher of technical drawing for several years in The Bahamas. The family relocated to the USA in 2008, residing first in Brooklyn, New York, and later moving to Columbia, Missouri. He enjoyed writing and reading poetry. He had written over 300 sonnets, ballads and narratives telling about his life as a Military Officer in Guyana, traveler, teacher and father. He published several poems and one young adult novel. In his quest for organizing the family’s history, Claurence was the founder of the “Gillis/McCammon Family Reunion Organization,” which has grown immensely. To date, the family has found over 300 relatives far and wide, resulting in the creation of a large extended family tree. Because of his efforts, much of the family is in contact with each other through the annual family reunions in Hopetown. In his spare time, he loved playing cricket and table tennis and did woodworking projects. His family and friends will miss his smile and great sense of humor. He is survived by one son, Lynnaun Johnson (EvaAnne) of Evanston, IL; three daughters, Lynique Johnson of New Jersey, Luesoni Johnson of Columbia, MO, and Lynelle Johnson of Warrensburg, MO; his wife, Yvonne Johnson of Columbia, MO; a step-son, Jarrel Allen; three brothers, Spurgeon Johnson, Patrick Renison Johnson and Lennox Johnson; three sisters, Juliet Williams (nee Waveney Johnson), Juene Johnson, and Gem Johnson; an uncle, Claurence Gillis of London; and many nieces and nephews, including Yonette Henry, Roxann Wilson, Sherriann Williams, Karen and Kim, Shevonne and Shellon, Donville, Kelvin, Frantz; several great-nieces and great-nephews, and many others. He is predeceased by his parents; his eldest brother, Stanley Johnson; and one sister, Elma (nee Johnson) Robertson. The funeral service will be held at 11:00 am on Monday, January 16, 2017 at H.T. May and Son Funeral Home at 2207 Holly Ave. in Columbia, Missouri. A visitation will be held at 10:00 am prior to the service. Interment will be at Elmwood Cemetery in Sycamore, IL. A short service at the burial site will be held on Thursday, January 19, 2017 at 11:00 am. A memorial fund will be established at a later date. May God grant his soul Eternal Peace!

Claurence &#8220;Denny&#8221; Johnson, 62, of Columbia, Missouri, entered into eternal rest on Wednesday, January 11, 2017 at the University of Missouri Hospital. He was born on April 29, 1954 in Hopetown, Guyana, the son of Spurgeon and Queen... View Obituary & Service Information

The family of Claurence Dennison Johnson created this Life Tributes page to make it easy to share your memories.